The 48-year-old singer has been a vocal supporter of Biden’s during the ongoing campaign. Speaking during a recent interview on the Variety and iHeart podcast “The Big Ticket,” he explained why he, as a gay Latino man, believes that the Democratic candidate is “the only option.”

“I’ve been supporting Biden forever,” Martin said. “I think he is the only option we have and he is great and he has been in politics all his life. This is the moment. We all need to get together and be loud about the course of this nation.”

The “Livin’ La Vida Loca” singer said that he believes he and his family have a personal stake in the outcome of the upcoming election, fearing that Trump will not have their best interests in mind.

“I am a Latino, gay [and] married to an Arab living in Trump’s America,” he explained. “We check all the boxes.” 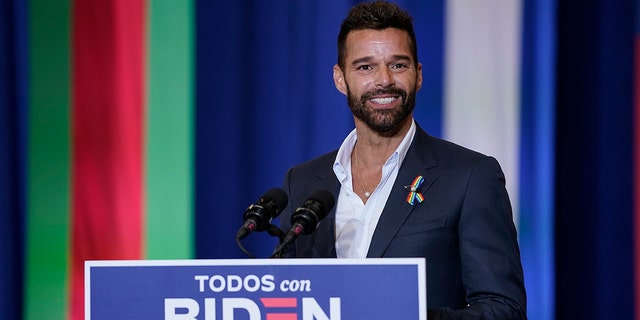 Martin has been married to artist Jwan Yosef since 2017. Together they have four children.

While Martin himself is no stranger to using his voice to advocate for the candidate he believes in, having joined Eva Longoria at a campaign event in Miami for Biden last month, he says it’s still disheartening to see fellow Latinos back Trump.

“It is super sad,” he said, “Trumpeters make a lot of noise. And it’s scary to see their enthusiasm but us, we’re doing what’s right, the right way and we’ll see what happens in November. I’m very optimistic.”

After downplaying the significance of Puerto Rico Gov. Wanda Vázquez’s endorsement of Trump over Biden earlier this month, the singer concluded by noting that the early voter turnout the country is seeing in this election gives him reason to have hope.

“I think when you have 50 million people voting already, it’s because we are not the only ones concerned about this and for that I am extremely happy,” Martin said. “We just take it one day at a time and we’ve had plans like we might leave the country, but no. We have to stay here and we have to fight for our rights and what we believe.”