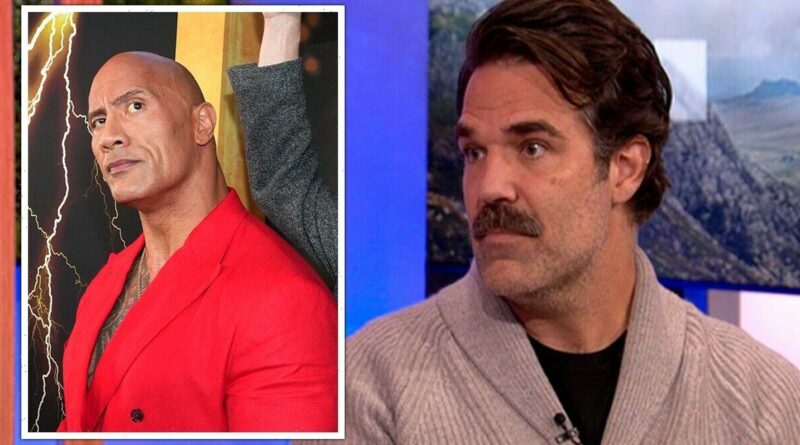 Appearing on The One Show alongside Black Adam stars Dwayne Johnson and Noah Centineo, Rob Delaney candidly shared that his new book is a memoir for both himself and his late son. Young Henry died in 2018, just before he turned three, and the moment struck a chord with the former pro-wrestler too.

Henry was Rob and Leah’s third son and was diagnosed with brain cancer in 2016, just after he turned one.

Rob lovingly recalled Henry as “a very sweet, mischievous, funny boy” who was immediately charming enough to hold everyone’s attention even with two older brothers in the home.

He shared on The One Show: “He sensed right away that he would have to be very magnetic and adorable and attractive because our house was a zoo.”

Young Henry underwent surgery to take out a tumour by his brain stem, and although this left him “seriously physically disabled” according to Rob, it didn’t hinder his magnetic personality.

Tragically, the surgery did not keep the cancer at bay and Henry’s parents were later told he would not survive the disease.

After Henry’s death in 2018, Dwayne led the tributes online even though he had not yet worked with the comedian.

The tweet simply read: “Stay strong my friend. My ohana sends love and light to you and your ohana.”

On The One Show, Rob praised Dwayne’s support, saying it was “sweet” and made him “feel nice”.

The Jumanji actor was visibly moved by Rob’s recollection of his son, seemingly wiping away tears on the live show.

With heavy emotion, Dwayne shared: “I had babies at home, all girls 21, six and four, and that story rocked us in our household.”

Rob noted Dwayne “did a good template” on how to help a bereaved parent, which he hopes is amplified in his book.

At the time of his son’s death, Rob was working on the fourth series of the award-winning show Catastrophe, and revealed he had agreed to do it when they were told Henry would not survive the cancer.

He claimed at first he was only there for the money, but found himself slowly enjoying life after Henry’s death.

He said: “If I had to stop and go cry or puke I did, then I’d come back and we’d start writing and after a while start laughing.

Rob, who currently lives in London with his wife Leah and their three sons, revealed that his new book was originally his way of making others feel the hurt his family was going through.

When he first started writing, Rob had the intention of presenting it as: “Here comes this book you scumbags who don’t know what my family’s been through.”

However, he touchingly revealed that the love he and his family had for Henry turned it into a book “about love despite my best efforts”.

Looking back at that time, Rob claimed that if he knew someone suffering a similar tragedy he wouldn’t offer to help.

Instead, he detailed his plan: “I’m just going to go over to their house, duplicate one of their keys while they’re napping and go do their laundry, force them to go out and take a walk while I watch one of their kids or whatever.

A Heart That Works is available for pre-order here and all profits are being donated to children’s hospices.