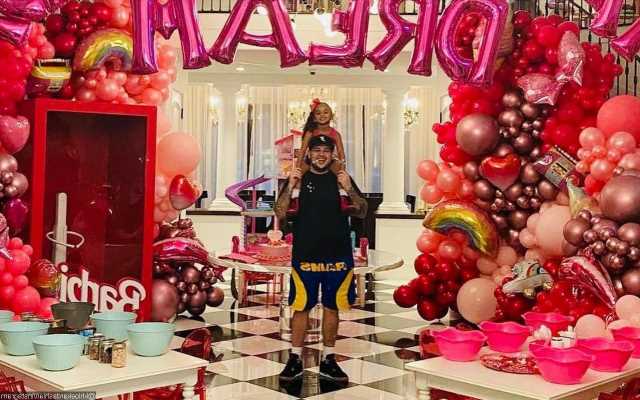 The younger Kardashian sibling was spotted dropping his and ex Blac Chyna’s five-year-old daughter Dream to a rock climbing facility for a playdate with her cousins.

AceShowbiz –Rob Kardashian is making a rare appearance. On Thursday, February 3, the younger Kardashian sibling was spotted dropping his five-year-old daughter Dream to a rock climbing facility for a playdate.

The “Keeping Up with the Kardashians” alum has been staying lowkey for the past years. Some new pictures, which were obtained by HollywoodLife.com, saw Rob wearing a black baseball cap.

It was hard to see Rob’s clothes as he remained inside the SUV. However, he seemingly was dressed in dark clothes. As for his little girl, she seemed to be in good spirits. She donned a light pink top and black pants for the outing with her cousins.

A source revealed to the news outlet that the cousins were super cute on their rock climbing playdate. During the playdate, the staff helped them with the rock climbing gear. “We were just helping them with their harnesses and climbing,” the insider said.

The informant added, “They were adorably competing against each other but it was all in fun. (Dream and True) were really sweet and they were just laughing, playing; it seems like they had a really good time.”

While Rob may have appeared occasionally at family events, he will not be in the famous family’s new Hulu show. “Rob will NOT be appearing in their Hulu show because he does not want his life or the life of his daughter to be a part of it. Everyone respects this decision,” said a source last November. “He has a solid relationship with all of his family. He also has a great relationship with his nieces and nephews. More importantly, Rob is a great father to his daughter and puts her before anything.”