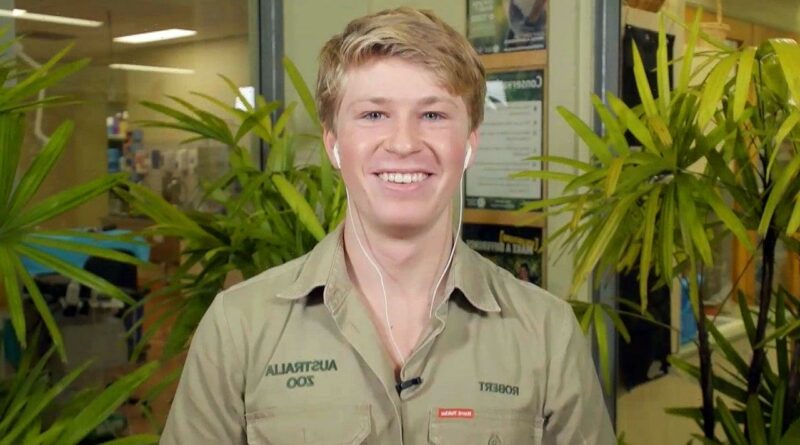 Robert Irwin is following in his father, Steven Irwin’s, footsteps. ET’s Rachel Smith talked to Irwin ahead of his Shark Week special where he opened up about his dad’s legacy and how his family felt about him swimming with sharks.

“I feel very, very lucky that I get to have such an amazing family around me, kind of help keep this legacy going that my dad started,” Irwin told ET. “I feel like all the work that we do is so important, and I just feel like it’s who I am more than what I do. Even right now, we’re at our wildlife hospital at Australia Zoo, and every day is just — it’s a new adventure, and I feel like I’m the luckiest kid in the world. It’s an honor, it really is.”

Irwin was just two years old when his father died in a stingray attack while filming at the Great Barrier Reef. On Irwin’s Shark Week special, he releases some vintage footage of him as a baby, holding an alligator while the Australian zookeeper proudly supervised.

“It’s amazing. It’s so meaningful. Honestly, I think that for me, of course losing dad at such a young age, that’s a tough thing to go through, and everyone will experience grief at some point in their life, and I just feel very lucky that I had such an amazing dad. He was of course a wildlife warrior, a force of nature. But he was the greatest father. He was always there for Bindi and I and his passion was just to teach us and impart as much wisdom as possible. And for me, to have so much of my life with him captured on camera, it’s just wonderful because I was less than three when he passed away. Memories definitely start to fade but when I can have this whole archive, this whole amazing set of footage I can go back on, I can literally just rewind, press play and relive all these amazing moments,” Irwin said of having those childhood memories on tape.

Re-watching those memories just pushes Irwin to continue his father’s mission and fight for wildlife conservation, which he said has never been more important than it is right now.

“All of these memories with dad, it’s incredibly meaningful for me, and I just feel very, very lucky, very honored that I get to continue this mission that he had…This message for wildlife conservation, this message connecting people with the natural world, it’s never been more important than right now,” he added of continuing the work his father started.

And while the late Steve isn’t around to continue that work, swimming with sharks, like Irwin does in his new special, is something he knows his dad would be doing if he was still working as a wildlife warrior today.

“I know that if he was still around today, he would be still fighting the good fight as a wildlife warrior and I would hope doing things like this Shark Week,” Irwin shared.“Following in his footsteps, I hope that he’d be proud, because for me, in my life, that’s what I want to do more than anything else. I just want to make him proud.”

As for how the rest of his family feels about him swimming with some of the most dangerous sharks in the world, Irwin said his mother, Terri, was more concerned with the temperature of the water than the sharks.

“I think after all the adventures mom and dad went on, she’s just like, ‘Go for it.’ She’s the coolest mom and to be honest she’s done everything. She was with dad jumping on crocs, she’s with him wrangling highly venomous snakes, she has been there since day one. I think it’s really nice I’ve got such an amazing and supportive family,” the enthusiastic wildlife photographer gushed. “If I want to go out and have a one on one experience with a great white shark, she’s right there just saying, ‘You know what? Go for it.’ She’s always been the one to really encourage me to follow my dreams from such a young age.”

He continued, “She’s still my mom so after I was in there for an hour-and-a-half she said, ‘Robert, you better not get too cold. You should probably come out of the water.’ And I’d be like, ‘OK.’ She was more concerned with the water temperature than the sharks. It was hilarious.”

And new mom Bindi, who swam with sharks herself, was just as proud and supportive. But that doesn’t mean there isn’t a little healthy competition between the two adventurers.

“She went and swam with wild sharks, biggest sharks in the sea and, of course, they’re not predators at all. They’re just really like whales, they just get around eating little plankton. They’re very peaceful. But I was so jealous when she went and swam with them. I was very, very jealous. So when I could finally do my own Shark Week adventure, I may have gloated a little bit, saying, ‘Well, you swam with wild sharks, but I was in with great whites,'” Irwin teased. “She was really, really proud and really happy, and I’ve always had such an amazing sister. I think it’s nice we’ve always just got along so well. Still though, a little bit of healthy competition is always good.”

See Irwin swim with sharks when his Shark Week special airs July 11 on the Discovery Channel.