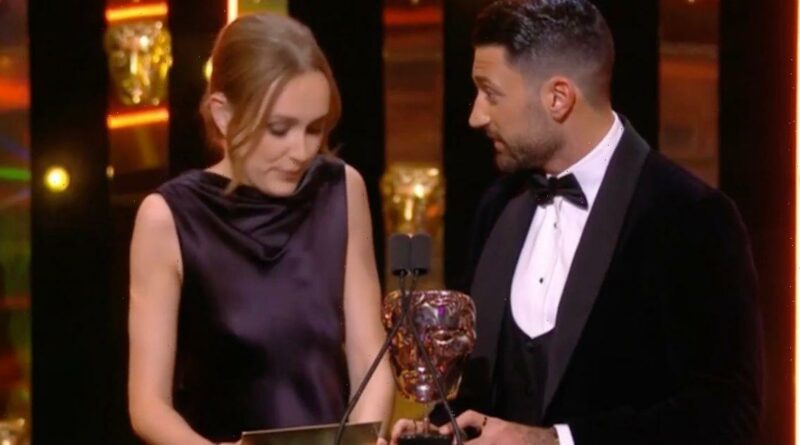 All eyes were on the stunning Rose Ayling–Ellis and Giovanni Pernice as they handed out an award at the BAFTAs.

Strictly winners Rose, 27, and Giovanni, 31, reunited for the awards ceremony and took to the stage to present the award for the Best Feature.

And after playfully introducing the nominees, Rose made a faux-pas which led her to be corrected by Giovanni.

"And the winner of the nomination is," Rose said, with Giovanni leaning in to her correct and saying: "winner of the BAFTA."

Fans on social media were over the moon to see the pair reunite at tonight's ceremony.

"Rose and Giovanni looking like goals as ever!" wrote one person.

Another said: "Can someone explain me how Rose Ayling-Ellis & Giovanni Pernice look so good? How is it possible?"

A third shared: "Still get goosebumps watching @RoseAylingEllis and @pernicegiovann1."

The couple picked up an award for must-see moment at the ceremony after their dance to Symphony on Strictly's 2021 series.

Rose was the series' first ever deaf contestant, and the routine was an unforgettable moment. As the pair performed a contemporary routine to Clean Bandit’s hit song Symphony, the music faded to silence, giving the audience an insight into what it's like to be deaf.

Speaking on the red carpet to Made in Chelsea 's Sam Thompson, the pair reflected on such a special moment.

"I feel so privileged to be nominated because it's a public vote, it's a TV moment, and the dance we did together was such a special dance," said Rose.

"It's not just a dance. It's created so much more. It's influenced the BSL interpreter law that was passed recently and it increased people signing up to learn sign language by 4000%."

Asked why the moment resonated with audiences, he answered: "I think it's because we all understood what Rose was going through every single week. I think we raised awareness for the deaf community as well.

"I think it was important for us to all understand that 10 second silence, and what does that mean? I think that's why it was so powerful."

For your latest showbiz news, sign up to OK!'s daily newsletter here