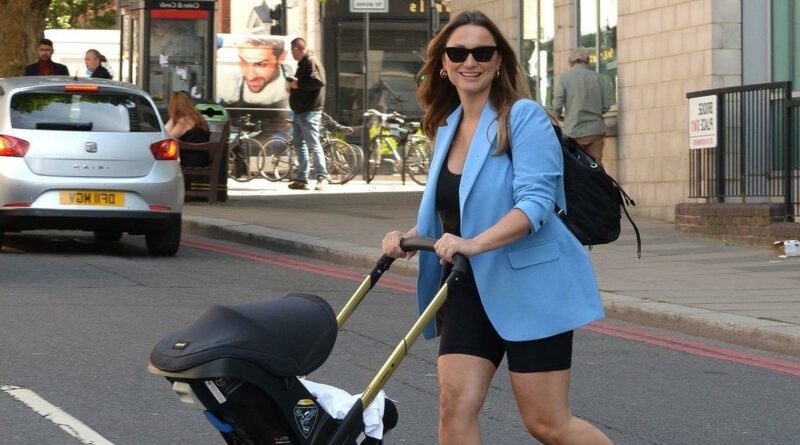 Sam Faiers made a stylish appearance as she headed out to the passport office with her four week old son Edward in central London.

The 31 year old looked as bright as the weather in the capital as she was seen sporting a light blue blazer while she strolled her baby boy around in a pram for the trip.

Sam happily showed off her figure wearing a black fitted tank top and matching cycling shorts which she wore underneath her lightweight jacket, and paired her outfit with white Nike trainers, black sunglasses and a black rucksack.

Sam discussed her hectic passport office trip in further detail after she returned home, telling fans: "So basically guys we had a longggg day yesterday. We had a fast track passport appointment that we almost didn't make for many reasons…

"Long story short, was pretty stressful. so when we got home first thing was to feed and settle Edward so he was happy and chilled."

The star also revealed that she left her passport pictures at home, missed her train "by one minute", had "two poo explosions" followed by a long queue wait on arrival.

Sam announced her baby boy’s name last week as she posted a cute photo of him with the caption: “Edward Knightley. A month ago today you were born at home surrounded by so much love.

"It’s for sure been a game changer for mummy having 3 little Knightley’s, but I wouldn’t change it for the world. I have soaked up every second with you darling, this is just the beginning…I’m so proud my heart could burst.”

Sam’s sister Billie Faiers is following in her sibling’s footsteps as she revealed this week that she is set to welcome her third child with husband Greg Shepherd, joining Edward’s cousins Nelly, seven, and Arthur, three.

Billie, 32, announced the news as she posted a photo of herself showing off her baby bump in a white bikini while on holiday with her family.

“Baby number 3 we can’t wait to meet you … We are so happy and excited,” the expectant star captioned.

Sister Sam replied in the comments: "Welcome to the 5 club sis. I’m so, so happy for you all. Another beautiful baby to join our family. The babies are going to be so close in age. so many memories to make."