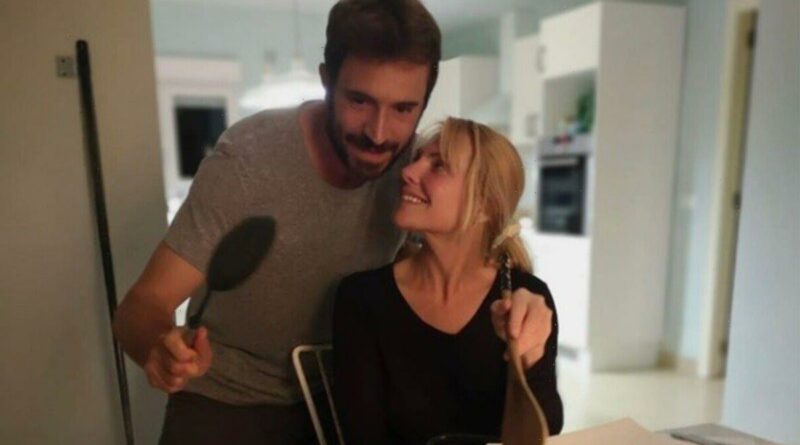 Former EastEnders actress Samantha Womack, 49, took to Instagram to update her 88,700 followers after she started chemotherapy treatment for breast cancer. Referring to the chemotherapy drug doxorubicin as the “red devil” due to his characteristic colour, Samantha said that she is finally getting her appetite back, but is “struggling with migraines”.

The actress shared a heartwarming image of her and boyfriend Oliver Farnworth after he cooked her a delicious open fire dinner.

Looking lovingly up at him as she held a wooden spoon, over the giant paella dish, Samantha captioned the image: “This was a few days ago – after getting appetite back- following ‘Red Devil chemo’

“Oli made this on an open fire in Valencia. Struggling with migraines at the moment, but Xena the rescue dog by my side, keeping her Topaz eyes on me……..”

Despite having gotten her appetite back, Samantha is now battling crippling migraines, prompting many of her celebrity friends and fans to send their well wishes.

Having gained more than 6,000 likes on the post, celebrity faces such as Denise Van Outen, Emma Bunton and Glynis Barber all sent their “love and hugs”.

These were only a small percentage of the hundreds of comments left for Samantha after she posted the update concerning her health.

Her celebrity friends and fans have been supporting Samantha throughout her entire cancer journey, which she has regularly documented on her social media site.

In a post thanking everyone for their support, Samantha posted a video of herself on her Instagram.

Showing off her baby-pink locks for the low-lit video, Samantha donned a khaki jumper as she explained she has had an operation.

Explaining more, Samantha said that she has undergone a lumpectomy, which aims to remove cancer or abnormal tissue from the breast, and a lymph node removal – which can help check if the cancer has spread, or reduce the chance of it returning.

Looking directly at the camera she said: “Hey, I just want to say thank you to everyone who has been sending me love after I shared my story about battling breast cancer.

“So, just to tell you, I’ve had my operation, I had a lumpectomy and lymph node removal and I am now going to start my first session of chemotherapy tomorrow.”

Speaking softly, Samantha concluded by saying: “I have read all your stories and messages, they’ve blown me away, genuinely.

“I just wanted to say thank you, I am very humbled by the fact that everyone has reached out and yeah, so, I’ll keep you posted.

“Just a huge thank you, sending you all lots of love.”

The soap star’s heartbreaking cancer was announced after she paid tribute to Grease star Olivia Newton-John.

In a tribute to the late actress, Samantha tweeted a picture of the pair with Olivia’s daughter Chloe, taken when Samantha had played Sandy in the 1993 West End production of Grease.

Samantha captioned the image: “This was the most magical of evenings. Olivia and Chloe had come to see Grease in London and we had dinner together afterwards. I was so excited and in awe, she was my childhood. I now start my own battle with this disease and am left feeling deeply moved. #OliviaNewtonJohn.”