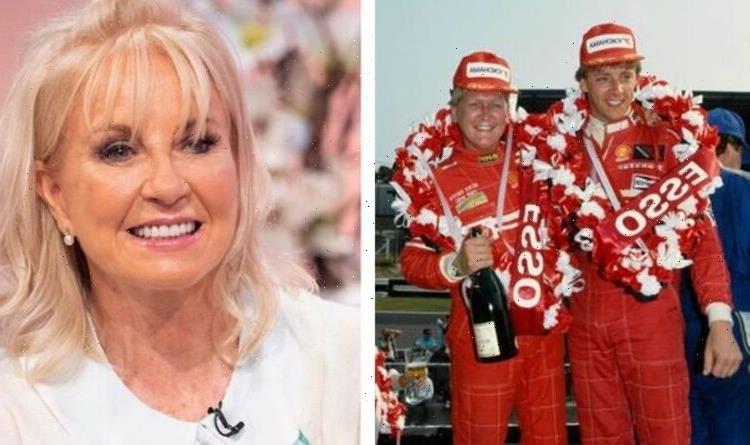 Phillip Schofield laughs at joke about Sarah Greene in 1992

Sarah Greene recently found love again with retired racing driver Robb Gravett, but had doubts over beginning their relationship as he had been her late husband Mike Smith’s close friend. The former Blue Peter presenter claims that, amid the uncertainty, she heard the voice of deceased Mike urging her that it was right to take the plunge.

Mike is pulling so many strings in my life

64-year-old Sarah had enjoyed a 25-year long marriage with Top of the Pops presenter Mike, until he tragically died in 2014.

The death occurred after he suffered complications from a major heart surgery procedure.

Sarah had at first felt guilty and uncertain about moving on, believing she might be betraying by choosing one of his pals.

The former Dancing On Ice star’ mind was changed when she felt she had heard Mike’s approving voice trying to communicate with her from beyond the grave.

“Mike is pulling so many strings in my life,” Sarah claimed, adding that she “sort of knows”.

Speaking to host Michael Fenton Stevens on the My Time Capsule podcast, she dramatically continued: “He has undoubtedly been responsible for me meeting my beloved who was one of his oldest friends.

“[He] waited a certain amount of time but did keep leaving messages on the answering machine.

“I thought he was just being kind.”

Also, having pictured her potential new beau coming to her house, which was covered in photos reminding them both of the man they had loved and cared for, she was unsure.

However, then she felt Mike was trying to contact her in her mind.

“I got a message almost saying: ‘For God’s sake, Greeno, Robb is trying to make contact with you because he actually wants to take you out, not because he’s kind.

“‘So will you just get off your a**e and go and answer the phone next time it rings?!’

“And lo and behold, a whole new conversation started. I’m sure, and Robb is very sure too [of the messages], because it’s a very strange situation.”

She added: “I remember being terribly worried and saying to this dear man who I’d known for all these years: ‘Isn’t it strange coming into the house and seeing all these pictures everywhere of Mike?’

The relationship might be unconventional, given the trio’s history with each other, but Sarah feels convinced that Mike not only approves but “pulled the strings” to first get them together.

She has not divulged when she and Robb began their romance, although they have been pictured together as early as 2018.

The pair have also set up business projects together, and according to Companies House, both are involved with a land transportation firm called Z Charge.

Meanwhile, she has taken on responsibilities in Mike’s company Flying TV, which offers aerial filming services.

Saying she receives encouraging guidance from her husband in that regard too, she has declared: “Taking on his company, there was no doubt that’s what he would have wanted me to do.”