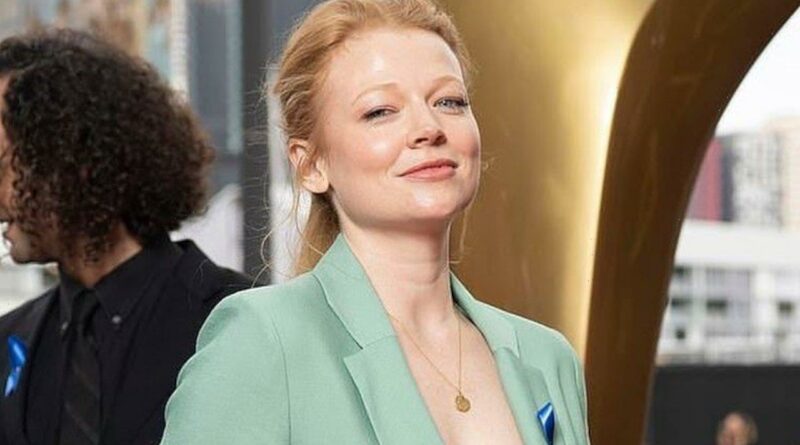 According to her ‘Succession’ co-star, Kieran Culkin, the actress portraying Shiv Roy on the show is doing ‘okay’ as she ‘just won an award’ for Best Supporting Actress in a Drama Series despite being diagnosed with the virus.

AceShowbiz –Sarah Snook is apparently doing good after contracting COVID-19. According to her “Succession” co-stars, the actress portraying Shiv Roy on the HBO series is “fine” following the COVID diagnosis that forced her to miss the 2022 Critics’ Choice Awards.

The 34-year-old actress was supposed to attend the star-studded event as she won the award for Best Supporting Actress in a Drama Series. Speaking to reporters backstage in the press room, her castmate, Kieran Culkin, shared the reason she was forced to miss the event.

“She tested positive for COVID this morning,” Kieran shared, “She’s okay. She’s stuck in a really nice hotel room with her husband who also has it. They are both feeling fine.” The “Scott Pilgrim vs. the World” actor, who was also honored with the Best Supporting Actor in a Drama Series, added, “I think it’s okay. She just won an award, she’s fine.”

In the meantime, Sarah’s co-star Brian Cox jokingly added, “F**k Covid, she could have got here.” Brian later teased that the cast would be heading over to Sarah’s room to celebrate their show’s Best Drama Series award and “to see which one gets tested for Covid next.”

News of Sarah’s COVID-19 diagnosis came just one day after she attended the 74th Director’s Guild of America Awards in Beverly Hills, Los Angeles as “Succession” director Mark Mylod took home the Outstanding Directorial Achievement in a Drama Series award. At the time, Sarah was joined by her co-stars, Brian and Kieran.

For the award-giving night, Sarah donned a lovely black sequin dress. The “Jessabelle” actress also rocked a set of matching gloves and velvet heels as well as a sparkly necklace and gold bracelet.

In the meantime, Kieran opted for a pinstripe vest and a matching set of pants worn underneath a black jacket. As for Brian, he kept it classy in a black suit and a blue shirt that were both accentuated by a deep purple tie.