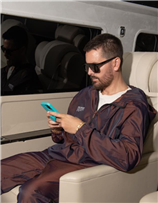 Kourtney Kardashian and Travis Barker held a third wedding ceremony on Sunday, May 22.

All eyes were on the couple, both positively and negatively. At the same time, Scott Disick received an outpouring of sympathy.

So how did the self-styled lord cope with his ex’s very public third wedding, one involving everyone they know and also their children?

There, he was seen at the Sapphire strip club late that night (technically, early Monday morning).

Reports say that he showed up at 2:30 AM with a group of buds.

Scott reportedly spent about an hour at the strip club.

He didn’t stick to his friend group, as he was seen talking extensively with one specific woman.

Then, he headed out back into the night.

Scott had not been shy about his trip to the city.

He even showed fans when he visited Casa Cipriani, captioning his Instagram Story with “Little movie night.”

Compared to the famously sad pasta portions served at Kourtney’s wedding, it looked like a feast.

(Yes, we know that weddings are for different meals altogether, but if you’re going to serve one bite of spaghetti, you might as well just hand it out on spoons)

Clearly, Scott’s evening did not end with dinner and a movie.

Scott hinted that his ultimate destination is “the beach,” and we somehow suspect that he doesn’t mean the coastline immediately surrounding New York City.

He is known to jet all over the country — and all over the world — for simple vacations, especially when he aims to impress a young, hot model.

Given the descriptions of his visit to the strip club, it’s possible that Sunday’s trip did not involve a teenage model.

But even without the strip club visit, this was certainly not a family vacation.

Scott’s kids weren’t with him — they were in Italy.

Reign, the youngest, was the ring-bearer for Kourtney and Travis. Penelope was the flower girl.

The kids did not take part in the impulsive “rehearsal” ceremony in Vegas, which was probably the most widely publicized and most surprising of the three ceremonies.

That took place in April, in the wee hours of another Monday morning, and of course was not legally binding … even if Kourtney and Travis probably didn’t realize that until later.

Still, it was a good practice run. And helped build them up to make their real wedding dreams come true this month.

This ceremony also did not include the kids, but it did include a couple of elderly relatives on both sides.

By marrying in America before their lavish Italian ceremony, they saved themselves some potential paperwork and let some relatives attend who wouldn’t be flying out to Italy. A win-win.