Home » Celebrities » Who Is Scott Reed On ’13 Reaons Why’ Season 2? The Jock Is Causing Issues

In the Season 2 trailer of 13 Reasons Why, that mysterious athlete miming the shooting of a gun had fans freaking out long before new episodes premiered on Netflix. Thanks to the cryptic moment and Season 1’s ominous ending of Tyler purchasing weapons, viewers have long guessed that a school shooting is in store for Season 2. Lower on the list of prioritized questions was the identity of the jock pretending to shoot, but the show has finally delivered a name to the face, and there’s definitely reason to keep an eye on him. With that terrifying faux shooting pose in mind, who is Scott Reed on 13 Reasons Why Season 2? This post contains spoilers for 13 Reasons Why Season 2.

In Episode 1 of the new season, new character Scott Reed is quickly linked to Bryce Walker and Montgomery de la Cruz in Tyler’s court testimony. Think of the fellow baseball player as the Goyle to Bryce’s Draco Malfoy and Monty’s Crabbe. In court, Tyler calls out the trio for getting away with aggressively bullying other students, but we never see the boys’ reactions to Tyler mentioning them while on the stand. However, Scott quickly becomes more than just a silent sidekick when Clay opens his locker and finds a polaroid photo showing an unknown boy and girl at a party. On the back is the infamous warning from the show’s trailer, "Hannah wasn’t the only one."

Cue Clay making eye contact with Scott across the hall and the latter fiercely staring him down. The intense exchange is enough for Clay to ask Tyler, aka the go-to yearbook expert, about the people in the photo, who Tyler identifies as former students of Liberty High. Clay also asks Tony for any information about Scott, but Tony only knows that he plays baseball and is friends with Bryce. 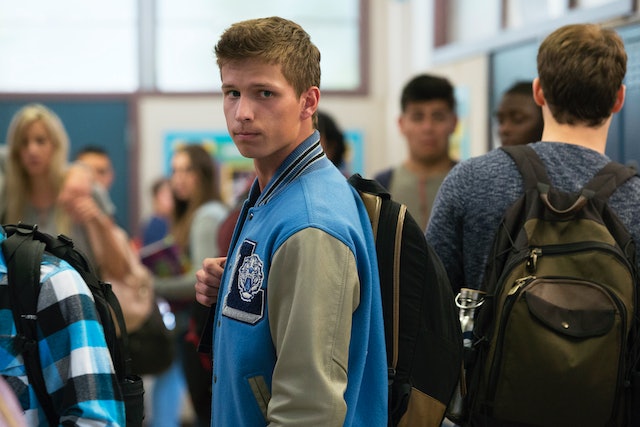 What with Bryce’s connection to the Bakers’ court case, Season 2 opens with plenty of scrutiny on the baseball team, hinting that any of them could be behind the mysterious letters Clay and other characters eventually receive. The jocks’ baseball coach even delivers a talk about sexual consent with Mr. Porter keeping watch nearby, but neither the coach nor any of the athletes seem to take it seriously. It would be easy to stereotype all of these guys as "bad," but as we quickly see with Zach this season, not all of them are game to deny what Bryce did for the sake of the team. But then again, this is high school, and peer pressure can be strong and mighty.

As a new character, Scott was clearly added to the show for a reason, but at the beginning of the season, it’s unclear what that may be. Clay obviously sees him as a threat, and he could definitely be a candidate for who is sending certain students threatening messages. While Monty takes steroid shots from Bryce and has a history of getting into fights, Scott flies under the radar and, as far as we know, he has no beef with the non-athletes that would cause suspicion when strange things happen.

However, in Episode 3, Scott makes an obvious statement about how he feels when he pretends to shoot a gun at Alex. Whether he’s just making fun of Alex’s failed suicide attempt or warning him about his involvement in the Bakers’ case, Scott’s motion is definitely noteworthy. The show takes place in a climate where school shootings have become a heartbreaking norm, and even joking about shooting a gun on school property is a lot for Scott to risk doing.

Whatever he turns out to do this season, Scott Reed is a character to watch closely. Anyone who calls himself a friend of Bryce is worth keeping an eye on, right?