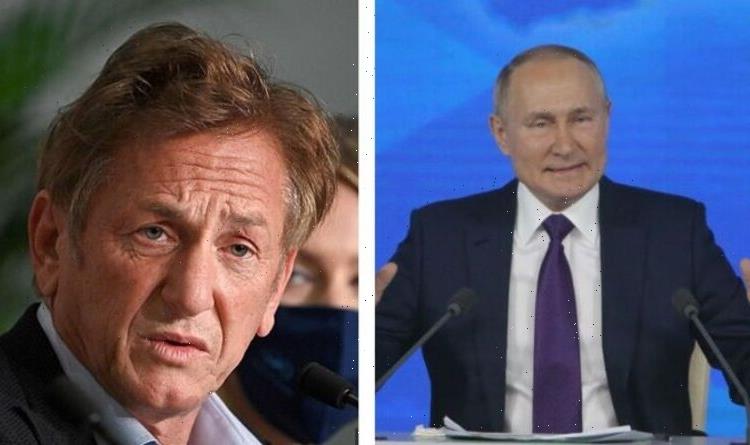 'I'm still in love with you' says Madonna to Sean Penn

Oscar-winning actor and film-maker Sean Penn branded the war a “brutal mistake” and urged his fellow Americans not to allow Ukraine to defend their country alone. The 61-year-old was in the country to film a documentary about rising tensions between the two nations, which had been planned months before the ill-fated invasion began.

Already a brutal mistake of lives taken and hearts broken

The actor could be seen sitting in the front row of a government press briefing in Kyiv, before he took to Twitter to share his anguish at the dramatic scenes unfolding.

“Already a brutal mistake of lives taken and hearts broken, and if he doesn’t relent, I believe Mr. Putin will have made a most horrible mistake for all of humankind,” he warned.

“Ukraine is the tip of the spear for the democratic embrace of dreams.

“If we allow it to fight alone, our soul as America is lost.”

READ NOW: Paul McCartney’s daughter claims there are ‘different sides’ to him

Sean is already well-known for his international philanthropy, having previously flown into Haiti after an earthquake to film a documentary called Citizen Penn.

However, his latest attempts to assist Ukraine have seen him heralded as more courageous than the Western political leaders.

The Ukrainian Government’s official statement was published on Facebook, praising: “Sean Penn demonstrates the courage that many others, especially western politicians lack.”

“[He] specially came to Kyiv to record all the events that are currently happening in Ukraine and to tell the world the truth about Russia’s invasion of our country,” the statement continued.

“Sean Penn is among those who support Ukraine in Ukraine today. Our country is grateful to him for such a show of courage and honesty.

“This morning the director visited the Office of the President… [he] spoke to journalists, to our military, saw how we defend our country.”

Meanwhile President Volodymyr Zelensky himself, also a former actor, posted footage of his meeting with Sean to his Instagram account.

He captioned the video clip: “The more people know about the war in the Ukraine, the higher the likelihood of stopping Russia!”

David Niven wife: Roger Moore claimed Niven’s wife ‘was b**** to him’ [DEBATE]

Zelensky has attempted to maintain optimism amid the bombings of his country, posting motivational and reassuring quotes on social media.

One read: “We successfully fought off enemy attacks. We are defending our country, our land, future of our children (sic).”

He has also urged Russian soldiers to turn back and go home in a personal address, begging them not to believe propaganda about the country.

However, today’s prospective peace talks between the two countries broke up without any resolution – and after radiation levels spiked at the nuclear power plant in Chernobyl while its workers were held hostage by Russian soldiers, fears were sparked for Ukraine’s future.

As the prospect of the worst conflict in European history since World War II looms, Sean was praised for showing up and boosting morale in the increasingly troubled country.

Twitter user nichole_bolduc replied to Sean’s tweets about the conflict, agreeing with him: “This is a test of the world’s unity and humanity.”