Serena Williams appeared to be one of the last still standing after Brooklyn Beckham and Nicola Peltz’s wedding.

The tennis legend was among the celebrity guests, including Eva Longoria and Spice Girls stars Mel B and Mel C, who attended Brooklyn and Nicola’s lavish wedding in Palm Beach, Florida on Saturday night.

It’s said the nuptials took place at 6pm with the wedding reception kicking off two hours later, during which the newlyweds shared their first dance to Elvis Presley’s Fools Rush In.

Other details about the celebratory bash are under wraps for now, but it’s clear Serena, 40, had a great time.

In her Instagram stories at 4am on Sunday, the sports star told her followers: ‘It’s so time for me to go to bed right now, I’m like, go to bed Serena, go to bed. I just need an intervention on sleep. Goodnight – or good morning!’

Despite the wee hours of the morning, Serena showed no signs of tiredness as her make-up was still flawless and she remained glammed up in her wedding outfit. She donned a stunning fuschia floor-length gown with a cut-out across her chest and a thigh-high side split. 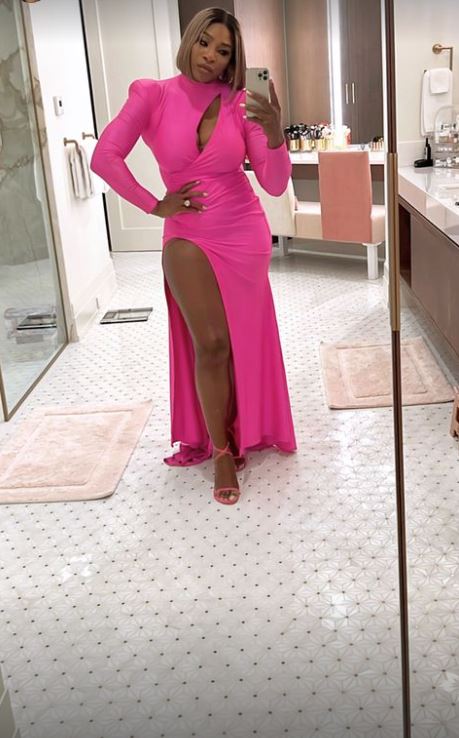 Tennis champ Venus, 41, looked equally stunning in a striking red minidress which got the seal of approval from bride Nicola, who commented: ‘VENUS,’ with a heart-eye emoji.

Serena also had an outfit change as she wore a metallic black minidress to the actual wedding ceremony.

Many of the guests have kept their social media activity to a minimum due to Brooklyn and Nicola reportedly implementing a phone ban on their big day, as the official photos will be published in Vogue magazine exclusively.

However, Brooklyn’s brother Romeo Beckham appeared to bypass the ban when he reposted an Instagram photo his girlfriend Mia Regan shared of their outfits for the rehearsal dinner.

Brooklyn, 23, and Nicola, 27, tied the knot at her parents’ sprawling $103million estate with the wedding itself costing an estimated $3m. Around 300 guests were in attendance to watch the Bates Motel actress marry Victoria and David Beckham’s eldest child after more than two years of dating.

A source said the groom was ‘blown away’ when his bride walked down the aisle, and added to The Sun: ‘It was a very special occasion with lots of personal touches. Brooklyn and Nicola clearly put a lot of thought and effort into making the day as special as possible.

‘They both looked stunning, and  very much in love.

‘Both of their families are very proud of them and  delighted to see them so happy.’

Brooklyn’s brothers Romeo, 19, and Cruz, 17, stood beside him at the altar as his best men, while his younger sister Harper, 10, was one of Nicola’s bridesmaids.

Not everyone was able to attend the nuptials though, as Brooklyn’s godfather Sir Elton John was forced to miss the ceremony due to a rescheduled tour show, while Spice Girls singer Emma Bunton expressed her disappointment at having to miss the event.