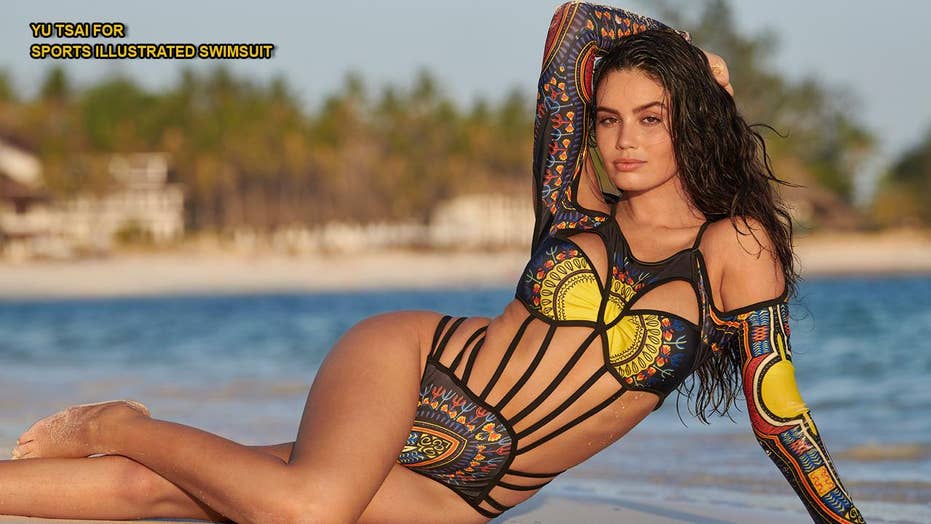 SI Swimsuit model Anne De Paula says she isn’t ruling out idea of becoming a doctor: ‘It can still happen’

Sports Illustrated Swimsuit model and Brazilian bombshell Anne De Paula said she isn’t ruling out the idea of pursuing her childhood dream to become a doctor.

Anne De Paula is back and eager to make a big splash.

The Brazilian beauty returned for this year’s Sports Illustrated Swimsuit issue, making it her third shoot since winning the magazine’s 2017 Model Search. And while De Paula started modeling at age 13, the pinup revealed she originally dreamed of pursuing the family business in the health world and becoming a doctor instead.

De Paula says that dream is not over, far from it, but that she doesn’t mind slipping into a skimpy bikini and frolicking on the beaches of Kenya for photographer Yu Tsai either.

Fox News spoke with De Paula about appearing on SI for the third time, how her parents really feel about the racy snaps and her secret to staying in bikini-ready shape all year long.

Fox News: This is your third time appearing in Sports Illustrated Swimsuit. What’s it been like?
Anne De Paula:  Every year feels like it is the first year. I always get nervous when I go on location. I always get so excited waiting for the magazine. My first year was funny because… I did body paint. So it was a crazy experience but I did learn a lot… It's always great to work with them. And it's my third year, hopefully, the fourth one [is around the corner].

Fox News: For this year your photo shoot took place in Kenya. How was it?

De Paula: I mean, Kenya was something to remember forever. I'm never going to forget it. I got to shoot on the beach, and I also got to shoot in the safari. Crazy experience; The wildlife, it's amazing; the culture is beautiful. I would never think I would have the chance to go to Kenya one day. And I'm so grateful.

Fox News: You originally won the Model Search competition for SI. How has your life changed since then?
De Paula: It has changed a lot. I've grown a lot since the model search. It's been three years. It's been a long and beautiful journey and I have no words to say how grateful I am to work with people like those that make you feel like yourself and feel right at home. You can call them friends and family.

Fox News: This year’s issue features Tyra Banks at 45 rocking a bikini. How empowering has it been to see someone like her on the cover?
De Paula: Banks is an icon; she's a legend, she's amazing, she's so nice. She was with us in Miami as well for the weekend. Paulina [Porizkova] was wonderful, too. She… appeared in the magazine with Tyra. It's an honor. That's how I hope to be in a few years because they are an example.

Fox News: You originally wanted to become a doctor before you were discovered. Can you tell us more about that?
De Paula: I did want to become a doctor when I was young. I feel like it was an influence because of my parents and my family. They all work in the [medical] field. I did look up to them. I did say I want to be a doctor one day. It still can happen, you never know! [But] I did fall in love with my [current] job and my mom had a big part in my career.

She was the one who actually said, "You have to be a model, maybe, why not?" And I was a tomboy. I was not into it. I was like, "I don't want to become a model. I wanna study. I wanna be a doctor." Which can happen still, you never know. But yeah, I love what I do now.

Fox News: Has your family seen your SI photos? How do they feel about them?
De Paula: My parents are so proud. They want to frame [my new] picture and have it huge in the living room. They have the body paint pictures in their house as well. They are extremely proud of me. I'm so happy I have great parents.

Fox News: How do you stay in bikini-ready shape all year long?
De Paula: I mean, I don't have any dieting. I don't like doing those things. I eat whatever I want. I try to be healthy but it [doesn't] always work. I like to eat burgers and pizzas, like everybody else. I feel like the secret to having a bikini body is just have a body and wear whatever you want and have fun. Be yourself.

Fox News: When it is cheat day, what’s on your plate?
De Paula: My cheat day. It's more than once a week, I would say. It's almost like every day is a cheat day for me. I would say a burger and pizza — bread is my thing every day.

Fox News: How did you get into Muay Thai?
De Paula: I started Muay Thai when I was 14 years old. It was my way to take the stress out [as a] teenager. I was playing soccer, and I was very energetic. I still do it sometimes. It's harder now because of work and castings and traveling. [But] it is a passion and hobby of mine. And of course, I might play professionally. I'm not a professional fighter but I enjoy it a lot.

Fox News: How do you deal with trolls on social media?
De Paula: I don't feed trolls on social media and I don't really read into those things. I feel like you are never going to please everyone ever. Everyone is always going to have an opinion on something and you have to respect that. I respect their opinions. If they don't like something I say or I post, it's their opinion, I'm fine with it. It never got to me really, I never really had a moment where I took something that someone said online. I feel like I have my feet on the ground. I know who I am and that's it.

Fox News: What the funniest or most outrageous thing you've ever had to do for a good photo?
De Paula: [My new shoot] with the lion was the craziest thing I have ever done in my life for sure. I thought I was going to die. It was so funny because I had a camera on me and I was like, "Can I send message to my family and just say 'I love you guys so much and if anything happens…'" I mean it's so wild… you never know what's going to happen. Of course, we were safe. We were with a safe team and everything.

Fox News: What are you hoping to accomplish next?
De Paula: I hope to accomplish so many things. Every year I have a big goals list that I want to do. But especially I always try to be there for my family. Be happy first is the most important — just be happy. Then you gotta do your job the best way possible.