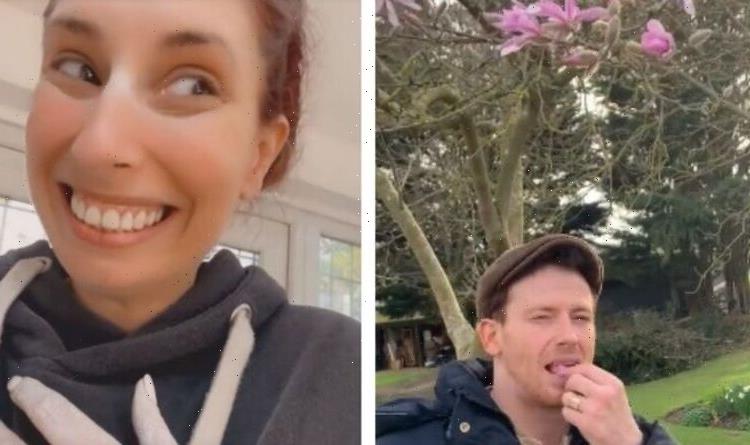 Stacey Solomon and Joe Swash like to document every aspect of family life at Pickle Cottage, where they live with their blended family of four children. However, this time the Loose Women star had followers open-mouthed after encouraging Joe to eat magnolias from the trees in their garden.

“Stace I found out the other day you can eat the buds of magnolia trees,” the caption on Stacey’s story read.

“Taste like ginger apparently… fun fact for Joe to try!”

The ex-Eastenders star had begun to grimace before he had so much as plucked the candy pink coloured blossoms off the tree.

“Do you know what? I’m sick of these fun facts already,” he blasted.

An unimpressed Joe then hit back that she was making a joke.

However, Stacey insisted from behind the camera: “It’s not a joke – I promise you can eat magnolia!”

“No?” she questioned, as he chewed a petal, with the disgusted look on his face saying it all.

The caption on the playful video clip read: “Let’s be honest, we’ve both ate worse.”

Some fans might believe Stacey is reaping mischievous revenge on her fiance after complaining yesterday that he had carelessly killed her house flowers.

Yesterday’s fun fact, unveiled by Stacey for the camera, had been: “Did you know that if you put fresh flowers above a radiator, they’ll die?”

Joe had chortled at her while holding their baby daughter Rose in his arms, hitting back: “That is a rubbish fact!”

“But did you know that fact?” a slightly frustrated Stacey persisted, in view of her five million followers.

When he scoffed: “Course I did!”, she hit back: “Well, then why do you keep putting my fresh flowers on the radiator and killing them?”

She added in her story caption: “Not a fun fact really. I’m just so sick of him killing my flowers when he’s pretending to tidy up tbh.”

“So thought this would help him remember!” (sic)

Although Joe might not be an expert when it comes to floral decor, Stacey has been happier with some of the other DIY tasks he has performed around the house.

The pair have been working tirelessly together to perfect their house during the renovations.

Stacey’s proudest moment was helping get the pool room redesigned, along with Joe’s “den” in time for his recent 40th birthday celebrations.

Stacey and Joe have two children together – son Rex and baby daughter Rose – and he is also committed to step-parenting Stacey’s two eldest children from previous relationships, Leighton and Zachary.

Joe also has an older son, Harry, from a previous relationship.