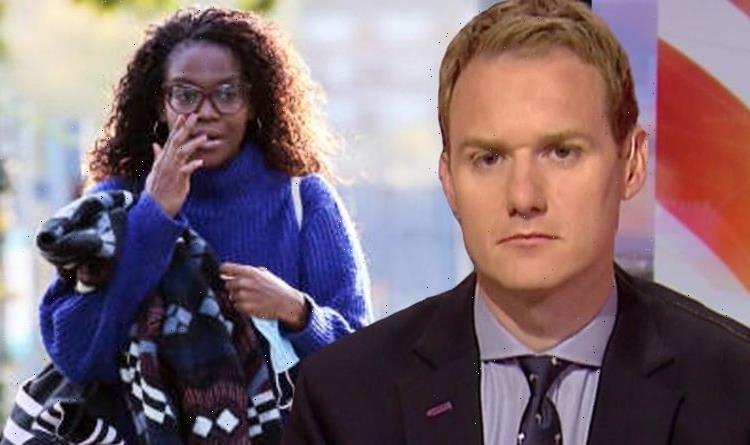 Dan Walker, 44, has sent a touching message of support to Oti Mabuse, 30, today, as she shared her worries for her parents who live in South Africa. The country has experienced riots following days of unrest after former President Jacob Zuma was jailed.

In view of her 163,000 followers, she wrote: “Imagine waking up to the realisation that your parents are still in you can’t see them, haven’t seen them for years and probably still won’t! #SouthAfricariots.”

Dan rushed to the comments section of the post to support her, alongside many of her fans.

“This is rotten for you and all your family, Oti. Take care,” another added.

A third commented: “I hope you can get in contact with them to make sure they are ok, this must be so hard for you to see.”

“I’m so sorry. Keeping you, your loved ones and all those affected in my thoughts and prayers x,” a fourth penned.

The dancer also tweeted that she was “so angry” by the events.

“We have all been through so much in the past year,” she commented.

“Looting because Jacob Zuma is in jail shouldn’t be one of them.”

The Strictly winner went on to share a video of police attempting to clamp down on looters in Soweto.

She wrote: “How can this be allowed to escalate to this point?”

Oti and her elder sister Motsi were born in Pretoria before they moved across to Germany to broaden their dance horizons.

Violent scenes erupted in cities across South Africa today, with dozens of people killed, according to reports, as grievances unleashed by the jailing of the ex-president boiled over into the worst violence the country has seen in years.

Protests that followed Zuma’s arrest last week have widened into looting and an outpouring of general anger over the hardship and inequality that persists 27 years after the end of apartheid.

Poverty has been exacerbated by severe social and economic restrictions aimed at blocking the spread of COVID-19.

Security officials said the government was working to halt the spread of the violence and looting, which has spread from Zuma’s home in KwaZulu-Natal province to the country’s biggest city Johannesburg and surrounding Gauteng province, and to the Indian Ocean port city of Durban.

Soldiers have been sent onto the streets to try to contain the unrest.

Zuma, 79, was sentenced last month for defying a constitutional court order to give evidence at an inquiry investigating high-level corruption during his nine years in office until 2018.

He also faces trial in a separate case on charges including corruption, fraud, racketeering and money laundering. He pleaded not guilty in court in May.

Zuma’s foundation said there would be no peace in South Africa until the former president was released from jail.

“Peace and stability in South Africa is directly linked to the release of President Zuma with immediate effect,” it said in a Tweet.