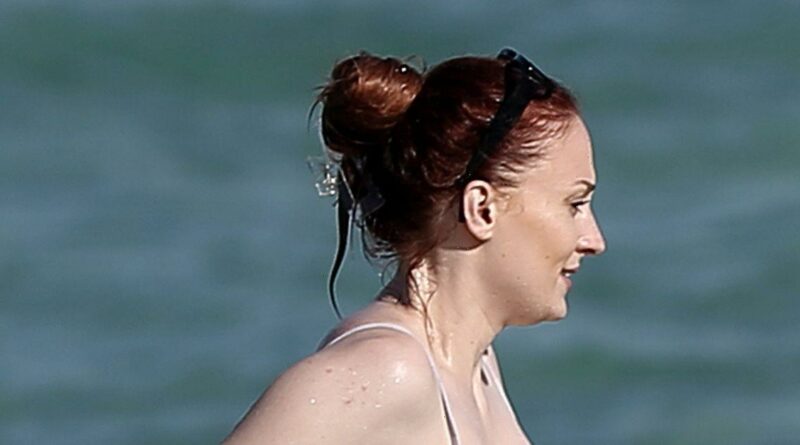 Sophie Turner looked happy and relaxed as she hit the beach in Miami recently.

The Game Of Thrones actress, who has sparked speculation she is pregnant with her second child, wore a tiny lilac bikini as she cooled off in the water

Sophie, 25, opted for a simple slick of make-up for her day in the sunshine and piled her newly dyed red tresses into a casual bun that was held in place by a pair of black shades.

The British beauty was joined at the beach by her husband Joe Jonas, 32, with whom she shares daughter Willa, 19 months.

Sophie's sighting at the beach comes amid swirling rumours that she is pregnant and expecting her second child with singer Joe.

Fans speculated about her pregnancy on social media after photos emerged of her out and about in recent weeks.

One person tweeted: "Sophie turner is pregnant again??? wtf i remember watching her live streams during first quarantine while she was pregnant like it was yesterday."

Another wrote: "LISTEN I HAVEN'T RECOVERED FROM MISS WILLA YET AND SOPHIE TURNER IS PREGNANT AGAIN."

A third added: "I must've been living under a huge rock because what do you mean Sophie turner is pregnant again????"

Sophie has not confirmed whether she is pregnant and expecting her second child.

The actress and her other half welcomed daughter Willa in July 2020.

Speaking of juggling parenthood and work, Joe told E! 's DailyPop in June last year: "It's definitely a new experience now that we are all kind of back. I'm going on tour, she's starting a project.

"It's going to be a lot of flying back and forth on days off, for me at least. It's kind of a new territory."

Sophie and Joe first met on social media, with the stunning Sansa Stark actress telling Harper's Bazaar UK: "We had a lot of mutual friends, and they'd been trying to introduce us for a long time.

"We were following each other on Instagram, and he direct-messaged me one fine day, out of the blue."