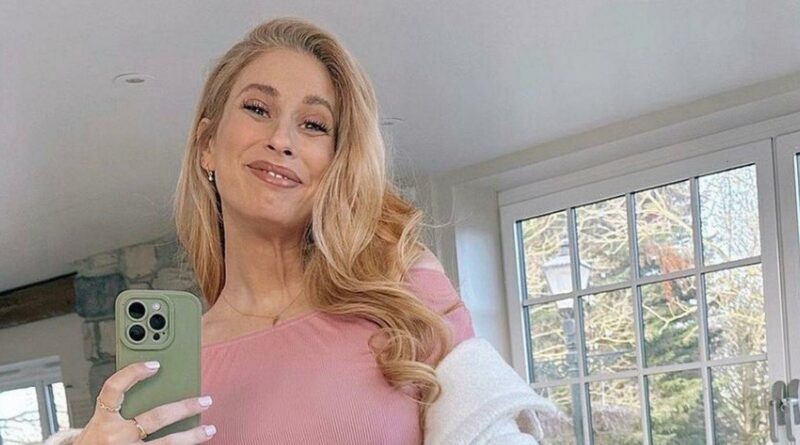 After taking a break from social media in recent days, fans were convinced that TV presenter Stacey Solomon had given birth to her fifth child.

However, the Loose Women panellist has confirmed that she is awaiting the little one’s arrival and stated that she is “very much full-term pregnant”.

Taking to Instagram, the mum-of-four explained her absence and told her fans that she has been ordered to rest up by her midwife as she gears up to give birth.

Struggling to contain her giggles, the 33-year-old told her 5.5 million followers about the break in a short clip on her stories.

“Some many of you were like Stace, don’t do that to us, you’ve been quiet for a few days we thought you’d given…” she laughed, as the star sat in her kitchen at her apply named Pickle Cottage.

“Sorry, I’m still very much full-term pregnant," she quipped, showing her blossoming belly in a causal pair of black leggings.

She continued, adding that she was hoping to finish a few final projects before giving birth.

“I just really want to try and make it a couple of days before baby comes…” she said.

“I know I can’t control it, but my midwife was like, look, if you even want the chance to get to those days…calm the hell down and don’t do anything silly….” She added, saying: “So, I’ve been trying to rest and I made it to today, which I’m so excited about…”

Stacey then revealed that today was the photoshoot for her latest In the Style collection, which will be her latest before her maternity leave begins.

She told fans that it would be her last collaboration with the brand for “quite a while”, as the former X Factor contestant would be taking some extended leave as her family continues to grow.

The beloved TV personality has three children with her husband, actor Joe Swash, and two older sons from previous relationships.

Despite this, Stacey has shown no signs of slowing down having recently done a photoshoot for her kids’ Spring/Summer range at Primark and this latest shoot with In The Style.

However, her hectic schedule has thrown some rather unexpected curveballs, with presenter Stacey recently admitting that her latest pregnancy was a bit of a shock.

She told fans on Instagram that the new addition was a “huge surprise”, but she was incredibly “thankful” in a heart-warming post.

The Sort Your Life Out host also admitted that she’d had to size up for her In The Style shoot, as her latest collection wasn’t a maternity range.

Wearing a Breton striped jumper from her latest collection, Stacey explained how she navigated the last-minute shoot whilst being heavily pregnant.

“I had no idea I was going to be pregnant when we started making this, let alone full term…” She joked, telling fans: “But I’ve sized up a few and it still works…”.

The proud designer will launch her collection later this year, but her followers will have to wait a little longer to her about the arrival of her bundle of joy.