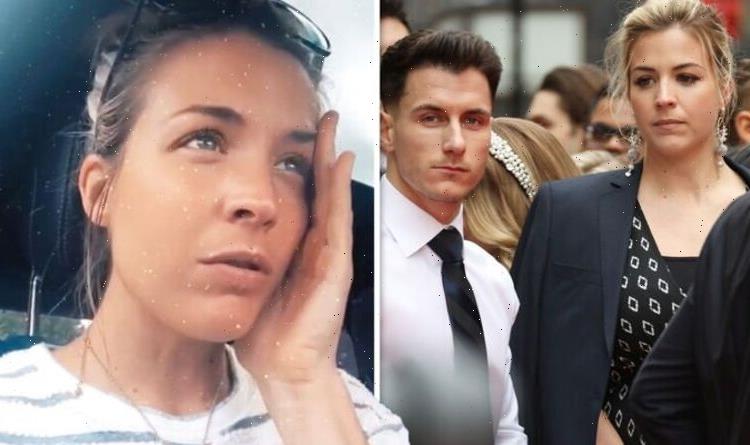 Gorka, 31, who is currently preparing for his UK-wide tour alongside Strictly co-star Karen Hauer, took some time out of his day and reacted to his other half’s candid admission.

Taking to Instagram, Gemma, 37, posted a photo of her boyfriend where he was unaware he had been caught on camera.

In the candid shot, Gorka could be seen sitting in a chair while in the hospital as his fiancée prepared to give birth to their daughter in 2019.

But the Strictly favourite was captured with his head laid back, headphones placed in his ears with his eyes closed.

In view of her 1.7 million followers, the mum-of-one took to Instagram stories and cheekily called out her beau.

She captioned the picture: “How @gorkamarquez casually nodded off during my labour.”

The former Strictly contestant revealed her other half had fallen asleep when she was due to give birth.

But Gorka cheekily fired back at the post as the dancer claimed he had simply been prepping for labour.

Taking to his own Instagram stories, the professional dancer attempted to explain what happened while they were at the hospital.

Gemma has previously opened up about having a second baby with her fiancé but admitted she was left traumatised by the birth of her daughter.

The former Hollyoaks star needed an emergency c-section when her baby’s heart rate dropped suddenly and she suffered a haemorrhage after the birth, losing nearly a litre of blood.

She said the experience in 2019 left her having nightmares and adamant she would not want another child with partner Gorka.

Gemma told Channel 4’s Steph’s Packed Lunch: “All these things were going through my mind, what did I do that caused all that to happen?

“I was telling myself for weeks and weeks I’d failed at childbirth.

“I was having horrible dreams that someone was going to take Mia from me.”

She is now considering having another baby, adding: “I’m at the stage where I want a sister or brother for Mia.

“The first few months of Mia’s life, I kept saying to my partner, Gorka, ‘I’m not going through that again’.

Gemma explained she met with a psychotherapist to learn more about how women can be helped through birth trauma.