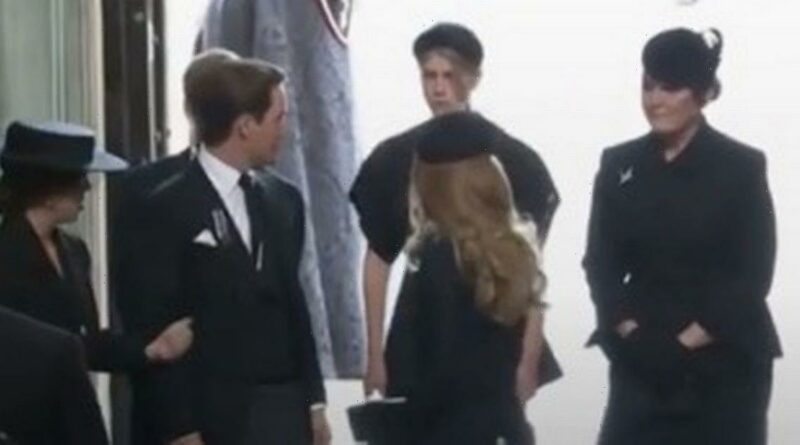 Princess Eugenie and Beatrice looked after their mother Sarah Ferguson in a sweet moment at the Queen's funeral on Monday 19 September.

As the Queen's grandchildren entered Westminster Abbey, Eugenie, 32, and Beatrice, 34, who were joined by their spouses, were seen turning around to look for their mother.

The two sisters then spent a few moments encouraging the Duchess of York, 62, to join them as they made their way inside the church to their seats.

But Sarah sweetly shook her head as she declined the offer, instead letting the Queen's other grandchildren, Lady Louise Windsor and James Viscount Severn, go in front of her.

The sweet moment wasn't missed by Royal fans as one person tweeted: "Sarah stood back to allow Louise and James to go ahead of her when entering with Beatrice and Eugenie which I thought was very thoughtful of her."

During the service, Princess Beatrice looked overcome with emotion at one point while the Countess of Wessex was spotted dabbing a tear from her eye.

Sarah, also known as Fergie and who divorced Prince Andrew in 1996, has said the Queen was "the most incredible mother-in-law and friend" to her and she would miss her "more than words can express" in her tribute after the late monarch’s death.

"I am heartbroken by the passing of Her Majesty the Queen," she said in a statement.

"She leaves behind an extraordinary legacy: the most fantastic example of duty and service and steadfastness, and a constant steadying presence as our head of state for more than 70 years.

"She has given her whole life selflessly to the people of the UK and the Commonwealth.

"To me, she was the most incredible mother-in-law and friend. I will always be grateful to her for the generosity she showed me in remaining close to me even after my divorce. I will miss her more than words can express."