The clatter of dishes, the murmur of diners, the sizzle of meat in the pan ― “Sweetbitter,” the new Starz adaptation of Stephanie Danler’s novel of the same name, is like a sensory bath immersing the viewer in a restaurant’s humming kitchen. It almost feels like you’re lurking by the kitchen doors in a real Manhattan eatery.

That’s because, in many ways, you are. To capture the hectic atmosphere of a restaurant kitchen and the muted glamour of the dining room, the show’s creators decided not to cut any corners: They built a working restaurant as the set ― kitchen, dining room and all.

“People were cooking food in that kitchen, and we were carrying it hot in our hands to ― sometimes, when it’s a one-shot ― to diners sitting in the room,” Tom Sturridge, who plays a bartender on the show, told HuffPost. “We couldn’t fake it.”

The show premiered on Sunday, kicking off a six-episode season that feels tantalizingly brief, more like an amuse-bouche than an entrée. Like the book, it follows a young woman, Tess (Ella Purnell), who moves to New York City with little money and no particular plan and gets a job at an upscale restaurant in Manhattan. She develops a fascination with a hot, brooding bartender named Jake (Sturridge) and with an elegant sommelier, Simone (Caitlin FitzGerald), who teaches her about fine wine and food.

The book is deeply informed by Danler’s time working at the Union Square Café in her 20s, and she brought that same granular knowledge of restaurant work to the making of the show. Every detail had to be right. “Steph was very particular” about everything from wine pairings to place settings, said Evan Jonigkeit, who plays a back waiter named Will.

Before filming even began, the cast participated in a two-week-long boot camp, where they learned foundational skills like the three-plate carry (a challenging move Tess struggles with during one episode) and the one-handed ferrying of trays filled with glasses. Danler hired the woman who trained her at Union Square Café to instruct the show’s cast.

Some of the cast had the advantage of already having worked in restaurants, like Jonigkeit. “He was a showoff,” laughed Purnell, who admitted to having trouble with the three-plate carry. “He liked to flourish those plates.” 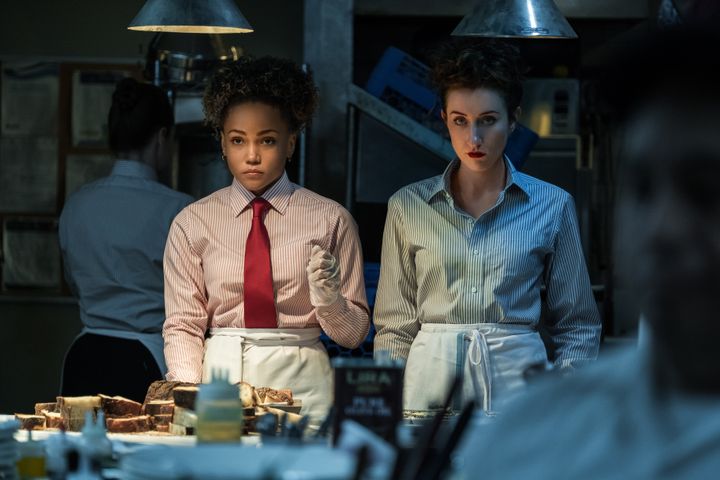 With its heady combination of sex, drugs and fine dining, the book was destined to be adapted to the screen. The realism of the show’s portrayal of the restaurant world goes well beyond the culinary details, to thorny issues like how sex, race and class manifest in the kitchen. The result is both seductively aspirational and shockingly gritty.

“I wanted people to be intoxicated but scared the way that you are when you’re experimenting with a substance for the first time,” Danler said of the adaptation.

Some aspects may feel even more vivid in an era of increased consciousness around sexual harassment and sex in the workplace. During the first season, Tess, a trainee back waiter in her probationary period, hooks up with more than one of the waitstaff; she also learns that Howard, the manager, has been sleeping with one of his employees. The sketchy and eyebrow-raising moments bubble up but aren’t dwelled upon in the show: There are no after-school specials.

“The show feels deeply feminist to me,” FitzGerald said, citing its authentic depiction of an imperfect, “complicated” professional world. Like the book, the show depicts “every single kind of sexual politics in the workplace, from consensual flirtation to drunken regrettable sex to microaggressions of misogyny to outright abuse of power,” Danler told HuffPost. “We just are writing about a restaurant that proves why [the Me Too] movement needed to happen to begin with.”

The sensual delights of the show aren’t just sexual, of course ― they’re gustatory. Perhaps just as important as the nitty-gritty details, Danler brought her genuine passion for food and wine to the production, becoming a sort of guru gourmand to her cast.

“[Danler] to me is like Simone to Tess,” Purnell told HuffPost. “I’m quite obsessed with Steph.” 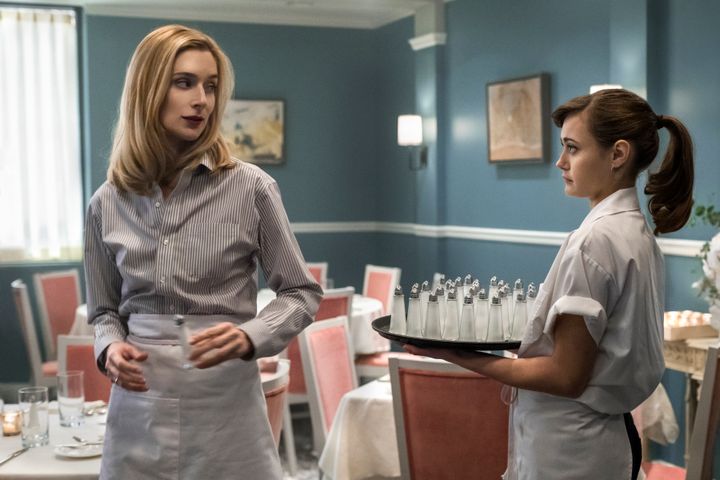 Simone, an elegant sommelier and server, acts as the wide-eyed new girl’s mentor. She offers her little lessons on appreciating fine food and drink, like how to roll a pricey Riesling around her tongue, tasting the sweet and sour notes. “Now your tongue is coded,” she tells Tess in one episode, after explaining where the taste buds for sweet, sour, salty, and bitter notes are located.

Danler “has taught all of us about wine,” said Eden Epstein, who plays a waitress named Ariel. “We go out to dinner with her, and it’s sumptuous and delicious.”

FitzGerald also remembers going wine-tasting with Danler. Not that she’s acquired a mastery on par with that of her character, who during the first episode identifies a wine down to its vintage year after tasting just a sip. “I would say my palate is still thankfully unrefined to a degree,” she joked. (Having a taste for the finer things, after all, can be expensive.)

For the actors who had worked in restaurants before, the comprehensive verisimilitude of the show created a woozy sense of familiarity. Epstein started on “Sweetbitter” shortly after leaving a job at Café Orlin in New York’s East Village ― and was bemused to find that, as part of her costume, she’d be wearing a fresh new pair of the same Dansko clogs she worn for years as a waitress.

FitzGerald, on the other hand, recalled leaving boot camp one day feeling inexplicably anxious. “I realized it was because I was having all these sense memories to when I was waiting tables,” she said. “So it felt entirely authentic to me.” 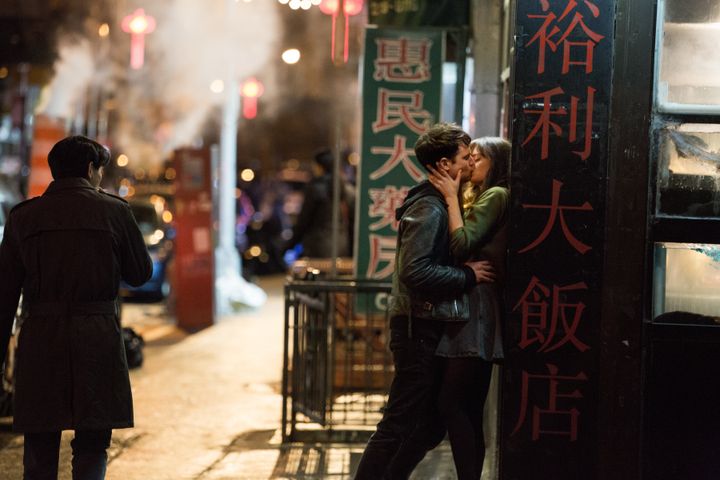 For some, the authenticity brought up particularly hurtful memories. Jasmine Mathews, who plays Heather, the sole black server, told HuffPost that her role on “Sweetbitter” mirrored her own experience as the only black server in restaurants during three years of waiting tables. “The racism I experienced was profound,” she said. As a result, she said, she “didn’t have to dig” to relate to her character’s situation.

Daniyar, who plays a back waiter named Sasha, struggled to find work waiting tables when he first moved to the United States due to his lack of fluency in English. His character, also a Russian immigrant, faces a similarly uphill battle to become a server at the restaurant, despite being a skilled waiter. “It’s so painful to look back [at] those days when you felt uncomfortable, when people were mean to you,” he said, recalling the time he spent taking orders at a pizzeria.

“I’m a gay Russian man, completely different than Tess,” he said. But when he read Sweetbitter, he thought, “I experienced exactly the same.”

And of course, Tess is the one viewers are encouraged to relate to ― the book is drawn from Danler’s own experience as a naive young (white) woman. In its honesty, “Sweetbitter” escapes the trap of lingering over and romanticizing the winsome heroine’s every misfortune. Whenever Tess herself falls into self-righteousness or self-pity, she’s sharply pulled up by the reality around her: Everyone she works with has their own sorrows and struggles and, yes, joys.

In one scene, she helps an undocumented kitchen worker, Santos, cash his paycheck ― unwittingly pissing off another employee, who had been serving as the bank go-between and skimming some off the top for a while. Her co-workers’ lives didn’t begin when she arrived. She’s just the newest entrant into a buzzing social and professional ecosystem.

So why not focus more directly on characters like Sasha, Heather and Santos? If given the chance, said Danler and showrunner Stuart Zicherman, they will. “We just were just scratching the surface of it,” said Zicherman of the show’s glancing explorations of immigration, race and identity. “We just wanted to tickle it because we really do want to tell these stories.”

In another season, he said, they might do an episode that follows Sasha home and explores his personal life, or an episode devoted to Santos, a character we’ve barely met thus far.

“The whole first season is from Tess’ perspective,” said Purnell. “If there were to be another one, we would see it the other way. Follow hundreds of different storylines. The tree will grow, with branches.”

In Season 1, “Sweetbitter” has introduced us to a world of glittering exteriors, but only begun to hint at the complexity of a fine restaurant’s inner machinery. It will take digging deep into the perspectives of all those varied characters to break through.