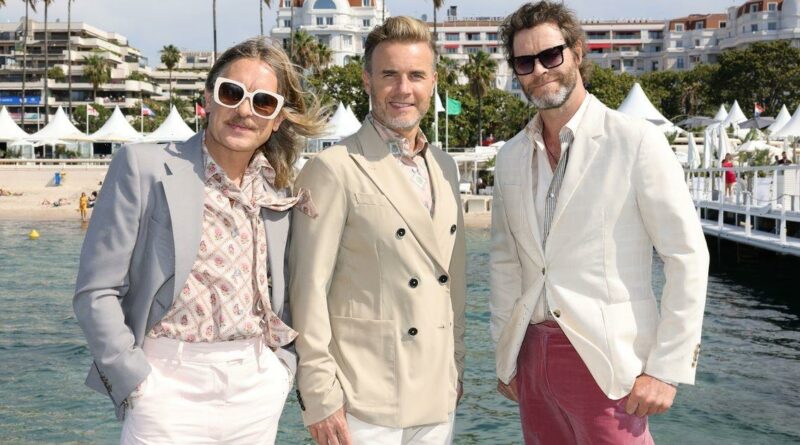 Take That singer Mark Owen looked virtually unrecognisable on Wednesday as he appeared alongside his bandmates in Cannes sporting a new look.

The 50 year old pop legend had appeared at the city’s annual film festival alongside bandmates Gary Barlow and Howard Donald, with many fans perplexed by his new style choice.

Sporting long hair and a neat moustache, Mark appeared to be channelling a very '70s aesthetic as he posed in a pair of white flared trousers, while wearing a floral printed pussy bow blouse.

The star also completed his look with a powder blue blazer and oversized shades, while he let his shoulder length hair flow freely in the French springtime breeze.

It wasn’t the first time fans have been left questioning the singer’s style choices in recent years, with many already having criticised his moustache at a virtual concert during the pandemic.

One fan even went so far as to compare Mark to The X Factor legend Wagner, as they tweeted: "When did Wagner join Take That??”

Despite the division over Mark's look in the past, the musical icon looked perfectly within his element as he stood smiling with his bandmates beside a glistening ocean.

The band were together again, although sadly without Robbie Williams and Jason Orange, as they took part in a photo call for the Greatest Days, a film featured in this year’s festival selection.

The film follows the journey of a young boyband, and is inspired by the trajectory of Take That and their journey to fame.

Based on the stage musical The Band, the film features a soundtrack performed by Take That and Universal Music.

According to Deadline, the story follows five best friends who have the night of their lives at a concert from their favourite boy band.

Twenty-five years later their lives have changed in a myriad of ways as they reunite to reminisce about their past and discover their future.

Although the band themselves are comprised of newcomers Aaron Bryan, Dalvin Cory, Joshua Jung, Mark Samaras and Mervin Noronha, a number of recognisable faces also star in the film, including Aisling Bea and Alice Lowe.

Take That weren’t the only stars in town either with Tom Cruise, who famously took part in the Queen’s Jubilee Celebrations over the weekend, also in attendance at this year’s festival.

The Hollywood legend has been touring the world to promote his latest flick, TopGun: Maverick in recent days, but still found time to attend the staple of the cinematic calendar in Southern France.

For all the latest showbiz stories,sign up for OK! 's daily newsletter here .