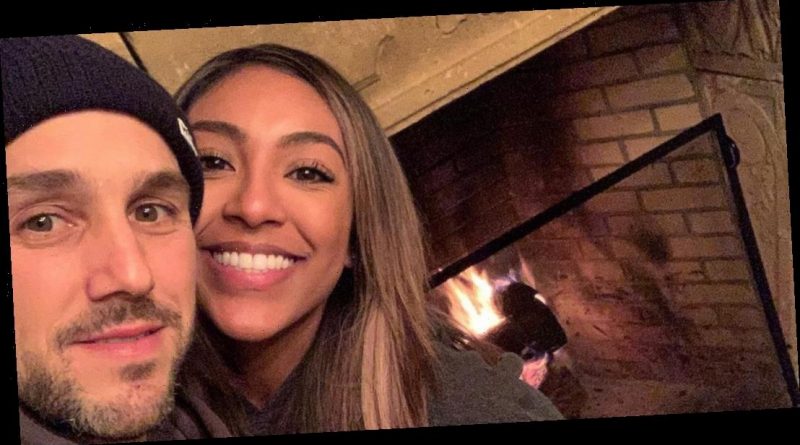 A milestone worth celebrating! Tayshia Adams and Zac Clark rang in his 37th birthday with a road trip to upstate New York.

The season 16 Bachelorette, 30, revealed that the couple would be traveling for the addiction specialist’s big day and offered fans a peek at the festivities. “Good morning!” she said in a Saturday, January 16, Instagram Story video of herself and Clark walking in a snowy field. “We are out and about.”

He added: “We’re about to hit that sauna.” The pair matched in all-black ensembles made for the winter weather — a dark puffer coat and beanie for her, a hoodie and nearly identical hat for him.

Adams later posted photos of the celebration, which included a “pregame” charcuterie board, a toast with four people and picturesque views of the snowy scenery.

Clark, for his part, shared a selfie with the Bachelor alum in which they posed in front of a fireplace.

The twosome got engaged during the December 2020 finale of The Bachelorette. Adams replaced Clare Crawley as the season 16 lead after the hairstylist, 39, accepted a proposal from Dale Moss and left the show early.

The former phlebotomist revealed her plan to split time with Clark between the East and West Coasts last month. “We’re actually going to be spending Christmas in New York, which is going to be amazing,” she explained on Good Morning America at the time. “I’m going to be bicoastal. I’ll have my place [in California] and I’m looking forward to spending time in New York with him and just getting used to being bicoastal.”

“No worries at all [about living bicoastal],” Adams exclusively told Us Weekly in December 2020. “We’re ready.”

Clark then noted, “It’s [all] excitement right now, for sure.”

Adams told fans via her Instagram Story later in the month that she hoped to “change” the New Jersey native’s apartment after moving in. “We have to kind of get some furniture,” she said. “We have to spruce up the place. It’s definitely a bachelor pad here, wouldn’t you agree?”

Clark shot down speculation in December 2020 that he drank while filming the reality series. “No, there was no drinking on the show. Sober to me means no drugs, no alcohol, no nothing since August of 2011,” he explained on the “Clickbait” podcast. “And I gotta say, you know, everyone who worked on the show, anytime there was a toast, there was someone with an apple cider sparkling …”

Scroll through the gallery below to see photos of Adams and Clark’s romantic getaway!