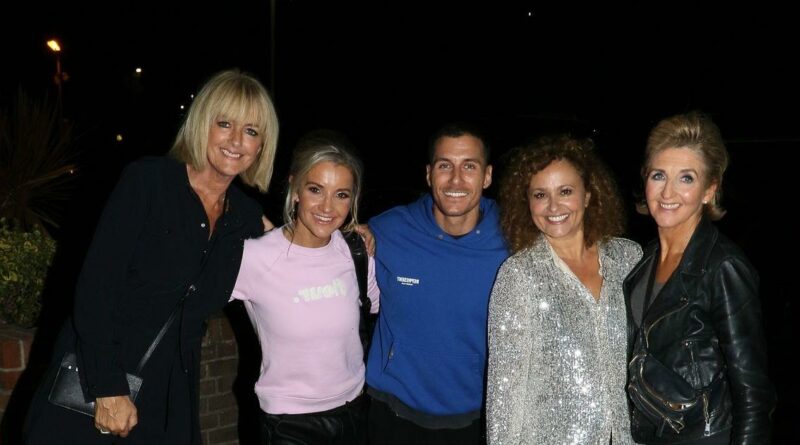 The stars of this year's Strictly Come Dancing couldn't wipe the smiles off their faces as they left the studio after their first dances on the show.

This season kicked off in spectacular sequinned style over the weekend, with celebrities such as actor Kym Marsh, singer Fleur East, Loose Women 's Kaye Adams and Paralympian Ellie Simmonds all putting their best feet forward.

Kaye Adams, 59, was supported on night one by her fellow Loose Women panellists and good friends Jane Moore and Nadia Sawalha, and the trio were seen beaming alongside Helen Skelton – also a contestant – and Strictly pro Gorka Marquez.

Ellie Simmonds, 27, was also spotted smiling as she left the studio in a black hoody, leggings and trainers, still sporting her glittery eyeshadow from the show.

The five-time gold winning Paralympian is paired with professional partner Nikita Kuzmin, and she was supported by her own partner, Matt, who was sat in the audience.

Ellie revealed that it was Matt who encouraged her to go on Strictly, saying: “He was like, ‘Go for it, you don’t know unless you try’. Now I’m so happy I said yes.”

Before making her debut on Strictly, Elliesaid that she’s always loved the showand since she’s been announced as a participant fan response has been great.

She added: “It just gets me emotional really. I’m the first individual with dwarfism to do it in the UK.

“When I was a kid, if I’d seen someone with dwarfism doing a dancing show on a Saturday night, it would just be something so special.”

Speaking exclusively to OK! , Ellie confessed: “One of the things I’m nervous about is not getting votes and being in the dance-off. If I got the Glitterball it would go in my house in Cheshire. I’d put it in my office on my desk.”

“It shows if I can do it – and I’ve seen the likes ofRose [Ayling-Ellis]who’s changing the world of disability and inclusivity – then people watching at home can adapt it to them, too.

Strictly Come Dancing continues on Saturday at 6.30pm on BBC One and BBC iPlayer.