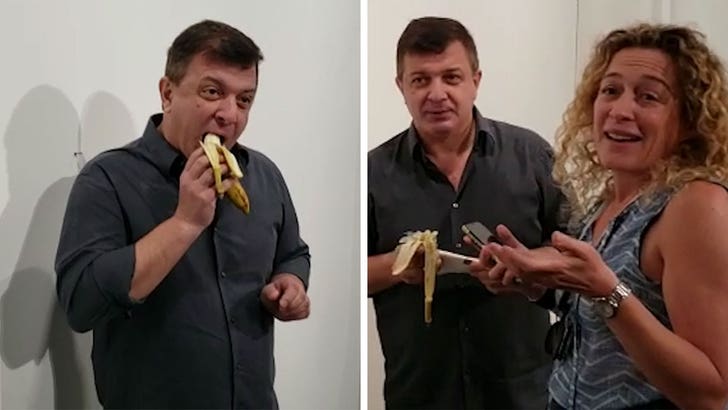 A banana duct taped to a wall — which sold for over $100k in Miami on behalf of a renowned artist — is now in the belly of another man … but apparently, it’s no big deal. We think …

Performance artist David Datuna took the bold step Saturday afternoon of EATING the super expensive fruit down at the Art Basel gallery in Miami — which an art collector in France recently bought for a whopping $120,000 from artist Maurizio Cattelan.

Datuna literally walked up and stripped the brown, aging banana from the wall it was taped to and peeled it open in front of lots of shocked onlookers … who couldn’t believe it.

On Instagram, he called his performance “Hungry Artist” and posted some aftermath footage of what appears to be gallery personnel sitting him down to take his info. Based on what we can tell, this is actually a no-no … the banana is NOT supposed to be tampered with … although the fruit itself is allowed to be replaced on a continuous basis as needed.

It’s a little confusing, but basically … the French art collector owns the “idea” of this art piece, so whether the banana itself sticks around or not doesn’t affect its value. She still has the certificate of authenticity, so she’s still got $120k worth of banana art to her name.

Still, it doesn’t seem like the folks who work at the gallery were all too thrilled with Datuna’s stunt. In footage of the incident — obtained by TMZ — you can hear Datuna joke about heading to jail … but according to reports, the guy hasn’t been arrested or charged with anything yet. We’re told the gallery is considering pursuing a complaint though.

BTW, the banana has reportedly already been replaced. File this one under … forbidden fruit.