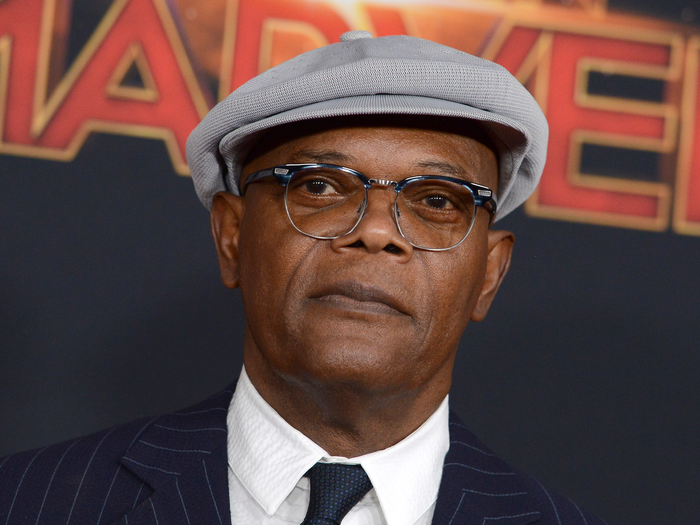 Samuel L. Jackson has been in a lot of movies. Some are good. Some are bad. But in all of them, Jackson gives performances that will entertain the heck out of you. And he often delivers a memorable line or two you won't be able to get out of your head.

From Mr. Glass in "Unbreakable" to Nick Fury in the Marvel Cinematic Universe to his many roles in Quentin Tarantino movies, he's created characters that will stand the test of time. And has made him the all-time highest-grossing actor of live-action movies.

But which role is his all-time best? 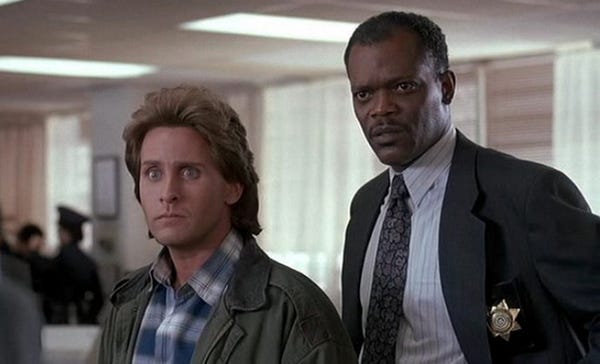 This spoof on the "Lethal Weapon" movies (and a whole bunch of others like "Basic Instinct" and "The Silence of the Lambs") is so bad it's good. Jackson plays the straight man in this buddy comedy spoof alongside Emilio Estevez (yes, this movie is VERY '90s). It shows Jackson can really star in any kind of movie. 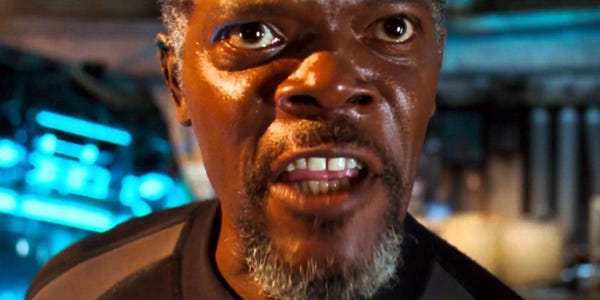 Need another example? How about him playing a scientist who gets eaten by a genetically engineered mako shark. The highlight of this shark movie that has built a fanbase over the years is the epic death scene by Jackson's character, who gets swallowed up by a shark while spouting an inspirational one-minute monologue to the rest of the scientists. 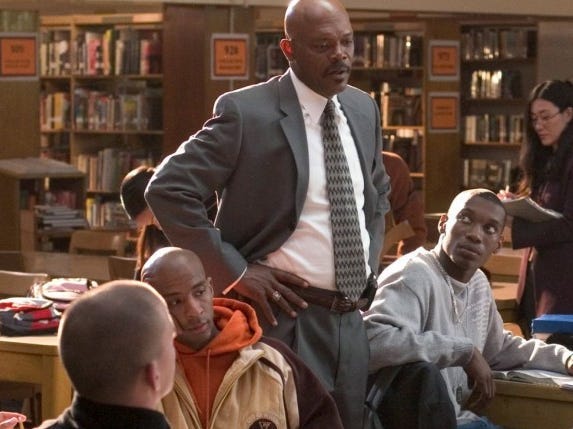 There's no joking from Jackson in this role. Here he plays a basketball coach who lays down the discipline to make his high-school players better men. Always up for delivering the dramatics, here he does it with an uplifting flavor. 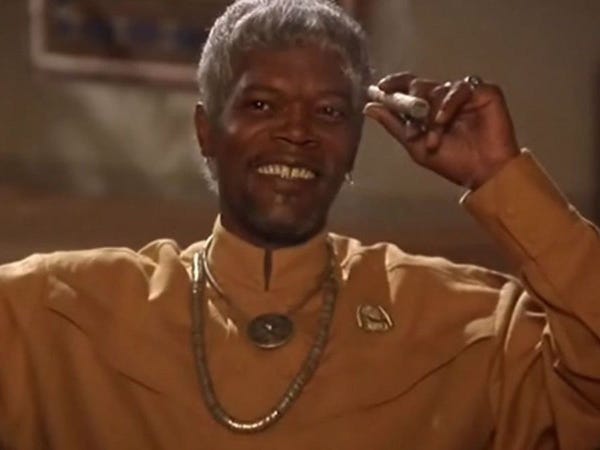 In this comedy, Jackson brings in the laughs with his Don King-like promoter character Reverend Sultan. This is another example showing that Jackson has never had any fear to jump into a wacky role. 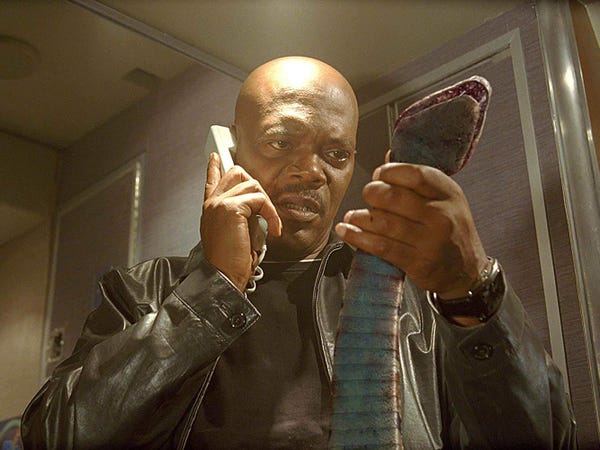 Legend has it Jackson was reading a trade paper one day, saw that a movie was being made with the working title "Snakes on a Plane" by Hong Kong action director Ronny Yu attached, and called up to get on the movie without even seeing the script. Yu didn't end up directing the movie, but at least Jackson was up for staying on the movie. Because if not, we would never have gotten this classic Sam Jackson line: "I've had it with these mother—-ing snakes on this mother—-ing plane!" 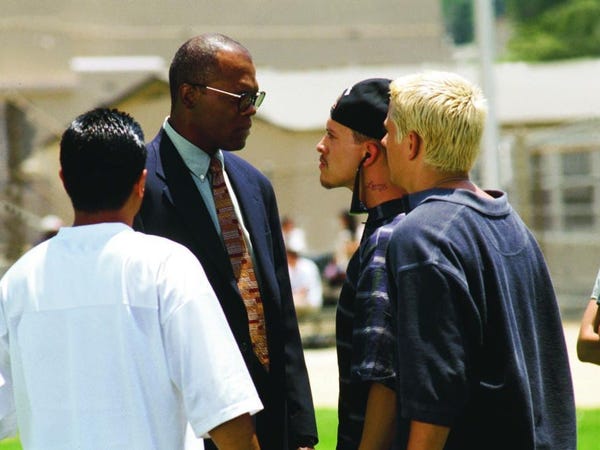 Jackson gets dark in this one. After being stabbed multiple times by a student while working as a New York City teacher, 15 months later Jackson's character is now in L.A. and working as a substitute teacher. But he's not going to be pushed around anymore. This one's a Jackson forgotten gem. 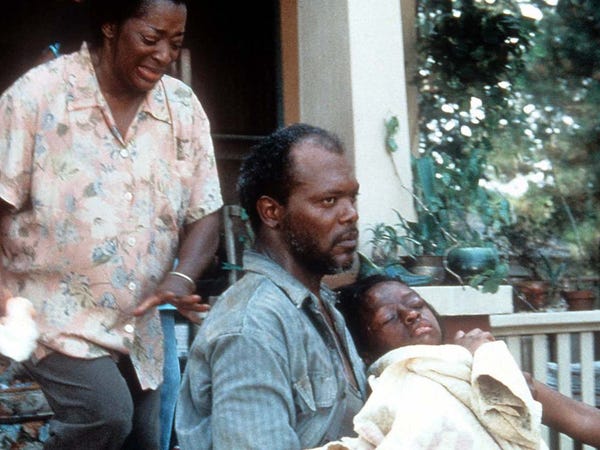 This courtroom drama based on the John Grisham novel stars Jackson as a father accused of murdering two white men who raped his daughter. Jackson gives a great performance alongside Matthew McConaughey and Sandra Bullock, who play his lawyers. And this one has another memorable Jackson line. While on the witness stand and being questioned by the district attorney (played by Kevin Spacey) he yells out, "Yes, they deserve to die, and I hope they burn in hell!"

You may recognize that from when Dave Chappelle spoofed Jackson in one of his episodes on "Chappelle's Show." 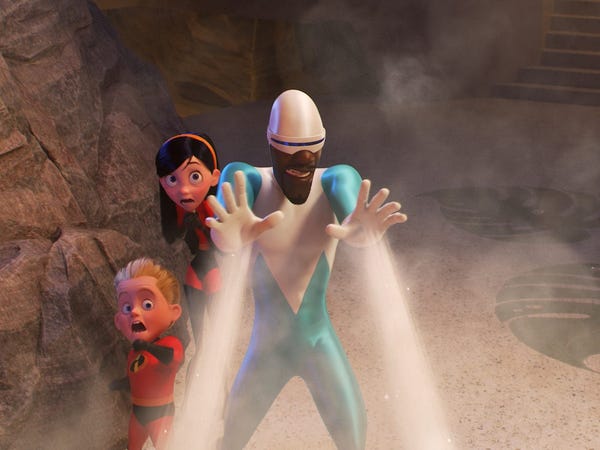 Playing superhero Frozone in the original and sequel, Jackson gives the character a perfect mix of authority (thanks to that unmistakable voice) and playfulness. 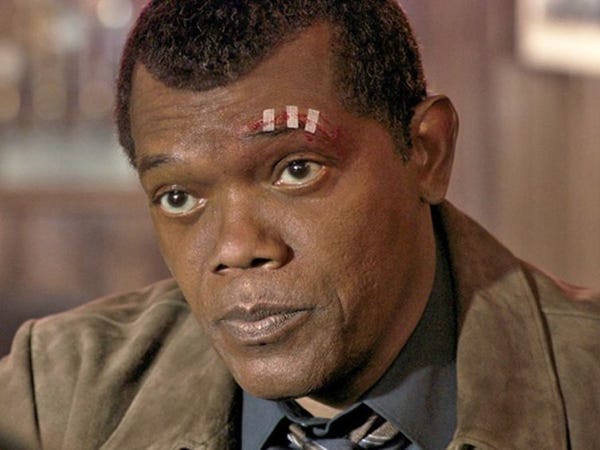 Though Jackson's flair for the dramatics is perfect in the often brief appearances Nick Fury get through the MCU they are mostly forgettable. So it was great to see Jackson give the character a little more in this movie. The de-aging wasn't distracting and he has a fun vibe with Brie Larson's Carol Danvers.

"Episode II" is when Jackson's Mace Windu finally gets to shine, if only for a moment. His battle versus Jango Fett may have been brief, but his no-look decapitation of the Mandalorian is a highlight of the "Star Wars" prequels. 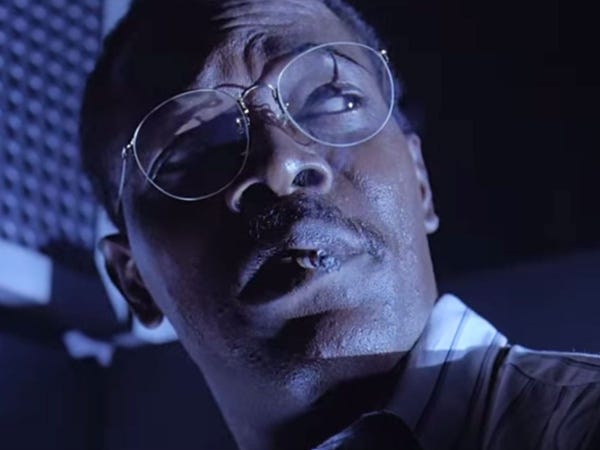 As the constantly smoking engineer, John Arnold, Jackson shines every time he's on screen. And he will always be remembered for the famous line, "Hold onto your butts." 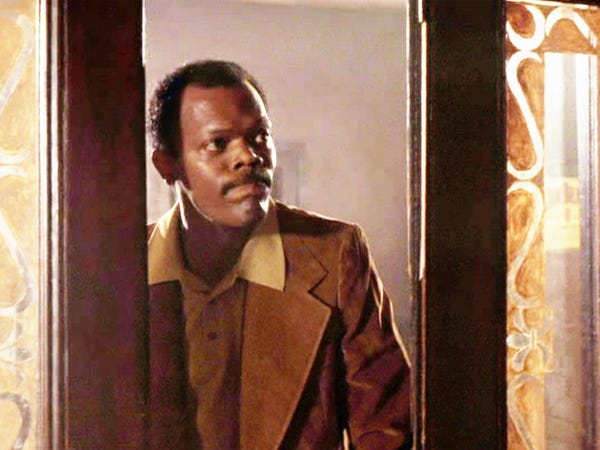 Another small role in a legendary movie, Jackson's swagger is next level as the playboy Stacks Edwards whose forgetfulness gets him killed. 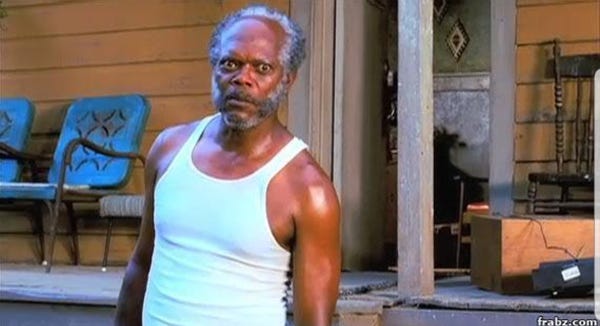 For director Craig Brewer's follow-up to his hit, "Hustle & Flow," he casts Jackson as an aging blues guitarist who is struggling with a troubled past. And things don't get any better when he tries to help out a young woman (played by Christina Ricci) who has also had it tough.

And yes, this is the movie where that meme came from. 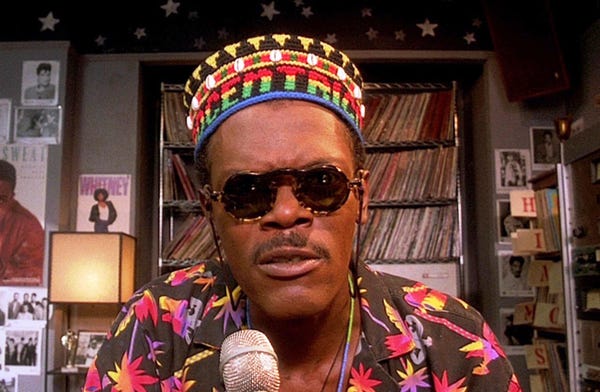 Playing neighborhood DJ Mister Señor Love Daddy, Jackson is the character that director Spike Lee uses to give the audience the real talk of what's going on in the movie when it's needed. And his high-energy performance is very memorable. 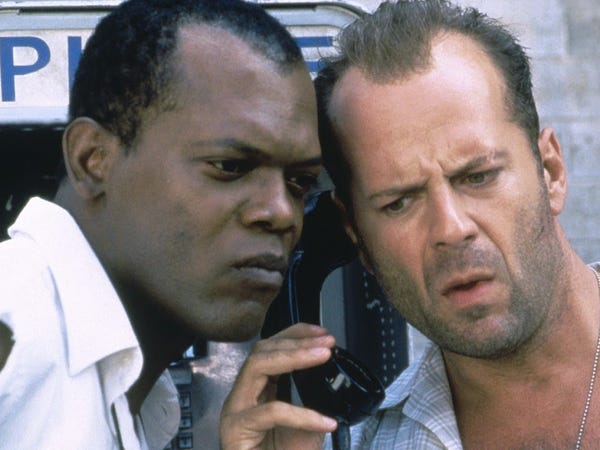 Just think how we would talk about the "Die Hard" movies if the franchise stopped at three. Because they kept going (and got worse) we have forgotten how enjoyable "With a Vengeance" is due to Jackson's casting. The pair of Jackson and Bruce Willis makes for a fun movie as the two can't stand each other but because of the circumstances can't leave each other. 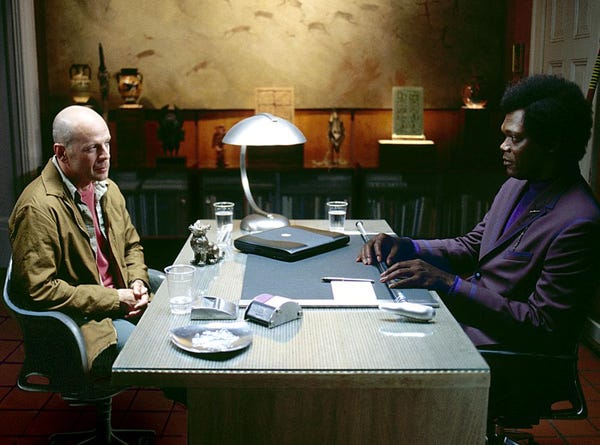 Willis and Jackson team up for a very different movie five years later. Jackson playing a real-life villain (though we don't realize it until the end of the movie) is a masterful performance. Too bad it all got messed up with "Glass." 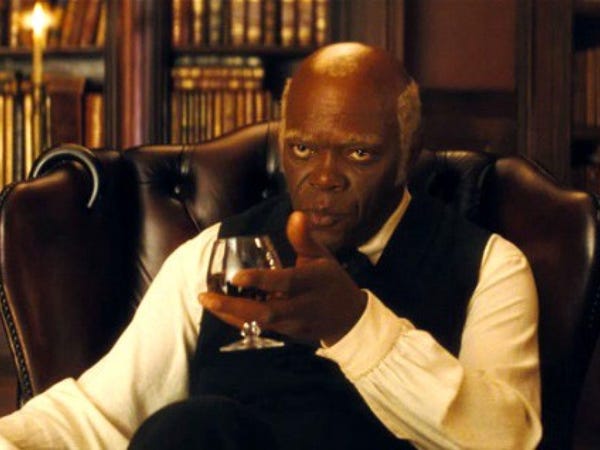 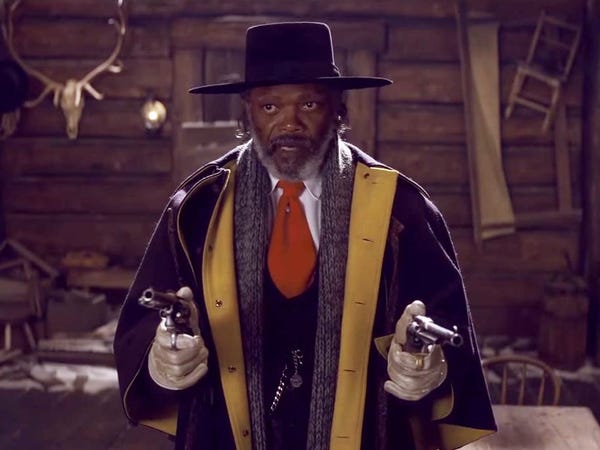 In Tarantino's movie after "Django," he lets Jackson be the emotional center of the story, as he plays a bounty hunter who finds himself in a tight spot when getting shelter during a snow storm with a collection of colorful characters. 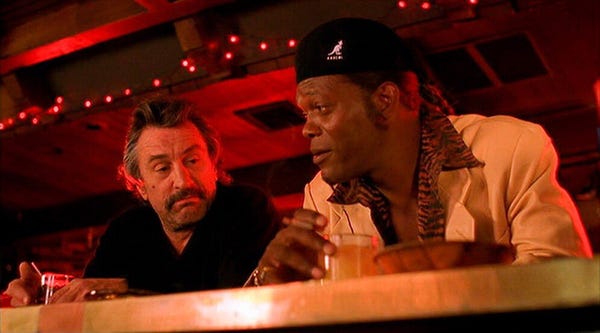 Jackson brings Elmore Leonard's Ordell Robbie character to life with such a mix of evil and charisma (of course helped by the words and direction of Tarantino) it's almost a shame to see his demise at the end. 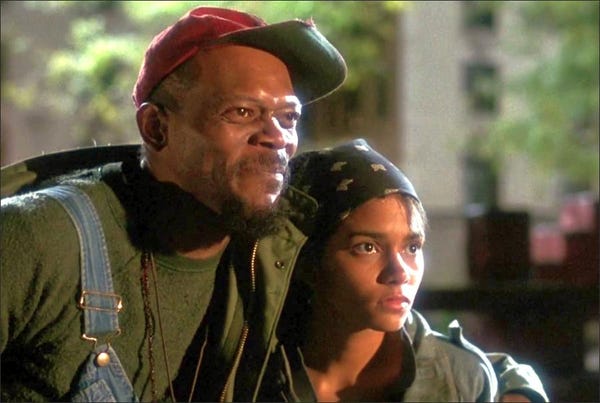 It's the most dramatic performance Jackson has given to date. As crack addict Gator, he's seen throughout the movie trying to get money from his brother, Flipper (Wesley Snipes), or smoking crack with his girlfriend (played by Halle Berry). His life then tragically ends by the hand of his own father at the end of the movie. What helped make the performance so powerful is that Jackson was recently out of rehab for his own crack addiction before the movie began production. 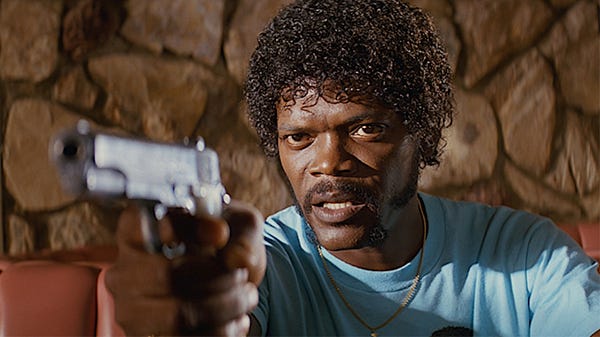 Though he's starred in countless movies, this first effort under the direction of Tarantino is the one for which Jackson will be best known. Earning a best supporting actor Oscar nomination, Jackson's Bible-quoting hitman Jules Winnfield is one of the most memorable characters in movie history. And unlike most of Jackson's greatest characters, Jules doesn't have just one memorable line, he has many!