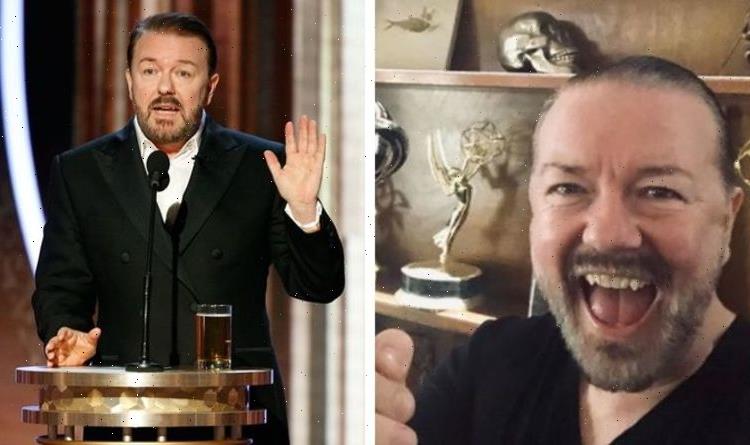 After Life: Ricky Gervais stars in trailer for season three

After being dropped by NBC, this year’s Golden Globes event was not televised and there was no red carpet pageantry, as not a single celebrity was in attendance. The heavily subdued ceremony took place after claims of corruption and a lack of diversity surrounded the event – but, not to be deterred, Ricky Gervais took to Twitter to post a nostalgic memory of the last time he had hosted the awards.

You’ll be pleased to know this is the last time I’m hosting these awards, so I don’t care anymore. I’m joking – I never did.

The quick-witted comedian reposted footage of the speech he’d made at the 77th annual Golden Globe Awards, in view of his more than 14 million avid followers.

The ceremony has been slammed as racist after an exposé in the Los Angeles Times discovered that there was not a single black person in the Hollywood Foreign Press Association, which presents the awards.

The 60-year-old comic joked about the allegations in 2020, by claiming: ” The Hollywood Foreign Press are all very racist”, seconds after quipping that they “can barely speak English”.

“Many talented people of colour were snubbed in major categories,” he elaborated, before adding: “We were going to do an In Memoriam this year, but when I saw the list of people who died, it wasn’t diverse enough.

“No, it was mostly white people and I thought, nah, not on my watch. Maybe next year. Let’s see what happens.”

The issues surrounding diversity have become a serious concern for the Golden Globes.

More than 100 Hollywood PR firms threatened to advise their celebrity client list to no longer work with HFPA unless it became more diverse.

The organisation was accused of “discriminatory behaviour, unprofessionalism, ethical impropriety and alleged financial corruption”, with additional claims surrounding free gifts that had reportedly been accepted.

The HFPA has responded to the controversy by hiring diversity advisers and pledging to increase ethnic minority representation.

However, Ricky appeared to have been missing the controversial humour of the event in its earlier years, by reflecting on the opening monologue he gave to kick off the 2020 show.

In it, he took aim at celebrities such as Leonardo DiCaprio, whom he ridiculed for his penchant for much younger women, plus paedophile Jeffrey Epstein, who died in jail, and singer R. Kelly, who is potentially facing the prospect of dying behind bars after being convicted of abusing underage girls.

“Talking of all you perverts, it was a big year for paedophile movies. Surviving R. Kelly, Leaving Neverland, Two Popes…” Ricky listed, before adding defiantly in response to groans from the audience: “Shut up. I don’t care.”

“Once Upon a Time in Hollywood, nearly three hours long. Leonardo DiCaprio attended the premiere and by the end his date was too old for him. Even Prince Andrew was like, ‘Come on, Leo, mate. You’re nearly 50-something.'”

Not everyone at the event seemed to share Ricky’s humour, with some audience members looking visibly disgruntled and shocked at times – but he also made numerous self-deprecating jokes while mentioning his Netflix series, Afterlife.

“You’ll be pleased to know this is the last time I’m hosting these awards, so I don’t care anymore,” he smirked, before correcting: “I’m joking. I never did. NBC clearly don’t care either — fifth time.”

Ricky’s position was clear at the time, as he reminded the audience at the event: “Remember, they’re just jokes. We’re all gonna die soon and there’s no sequel, so remember that.”

His Twitter fans clearly agreed with the sentiment, with @CLewis31182 declaring his speech was “possibly the greatest 8 minutes in television history”.

When asked by @ScottFeinberg his thoughts on this year’s subdued awards, Ricky admitted in response: “I was asleep!”