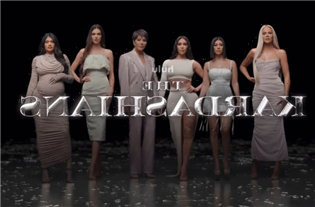 Babies will be on the brain and also in the womb when The Kardashians kicks off on Hulu next month.

As you have likely heard by now, this famous family wrapped up their time on E! last June and then announced they had signed a VERY lucrative contract with the aformentioned streaming service.

For now, this contract entails a minimum of 40 episodes of The Kardashians airing over the next two years.

In the first official trailer for the upcoming reality show, meanwhile, viewers see the tagline “lives may change, but family is forever.”

They also hear from Kourtney Kardashian and Travis Barker, who make no secret in front of the camera just what their plans are for the future.

“Travis and I want to have a baby,” the Poosh mogul says in the footage… before the couple is seen entering a doctor’s office.

The preview then shows their physician asking Kardashian for a “sample,” prompting the reality star to quip:

“We’ll take our mics off so you don’t get the audio.”

We’ve been hearing rumors for awhile now of Kourtney and Travis trying to procreate.

Kardashian is already mom to kids Mason, 11, Penelope, 9, and Reign, 6, while Barker is dad to son Landon, 18, and daughter Alabama, 16. He also shares stepdaughter Atiana, 22, with his ex-wife Shanna Moakler.

“My pregnancy is really public this time,” she tells the camera in one trailer confessional scene, comparing the experience to being pregnant with daughter Stormi, who is now four years old.

Elsewhere, Tristan Thompson will still be around.

It’s unclear exactly when these scenes were filmed, but Khloe recently told Variety that the NBA player’s paternity lawsuit with Maralee Nichols will be addressed on the series.

Finally… we’ll get a mention of Pete Davidson, who Kim started dating in October and who is actively beefingg hard with Kanye West.

Kris Jenner describes Kim’s romance with the comedian as one that nobody “saw coming” in this new video.

While shooting for a confessional interview, the KKW Beauty founder smiles as she looks at her phone.

“Who are you texting, Kim?” a voice asks from off camera. “Does his name rhyme with ‘Feet’?”

“I have not filmed with [Pete],” Kim told Variety when asked whether her boyfriend will be on screen this season. “And I’m not opposed to it. It’s just not what he does.”

“But if there was an event happening and he was there, he wouldn’t tell the cameras to get away. I think I might film something really exciting coming, but it wouldn’t be for this season.”

The Kardashians premieres April 14 on Hulu.