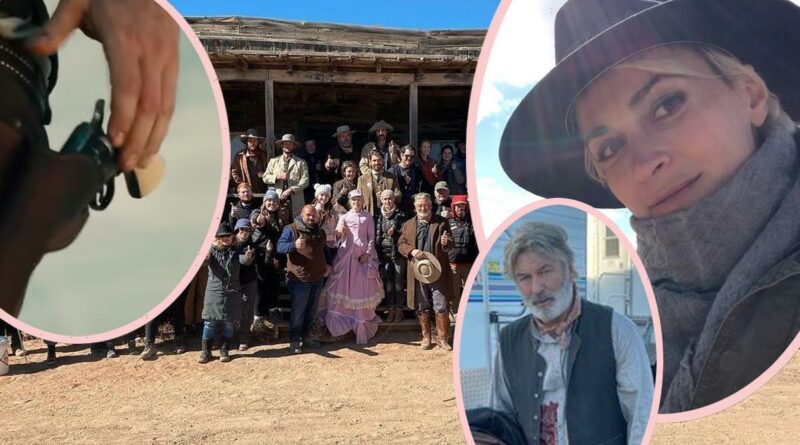 Ever since the tragic shooting death of cinematographer Halyna Hutchins on the set of Rust last week, people have been asking the same question: How could this happen??

The rules for handling firearms on film sets are incredibly strict. In fact, looking at the past 40 years of cinematic, we could only find two other cases of gun deaths on movie and TV sets, and both were the result of people breaking those rules. (More on those HERE.)

So what happened this time? Sounds like the rules were broken yet again. For instance, there should never be live ammunition on a film set for any reason. While real weapons are used, they are only ever loaded with blanks or dummy rounds. So there’s no reason to have live rounds around. And yet… we’ve heard that’s exactly what was in the pistol fired by Alec Baldwin on Thursday. We may finally have an answer why.

According to a new report in The Wrap, a source claims the prop guns were being used for target practice. This insider, who is said to have knowledge from the set, explains that crew members were taking the Old West weapons, loading them with very real bullets, and going “pinging” — firing at empty bottles and cans in the desert. Why? To pass the time. Yeah, that’s right. For fun. Just… wow.

This set source says the pistol Alec Baldwin was using that day was one of a few which had been taken “pinging” that morning and then put back before the day’s filming. That would explain why there would be a live round in it. But shouldn’t it have been seen?

Well, according to what we’ve read in search warrants issued over the weekend, it was assistant director Dave Halls who grabbed the six shooter from a selection of three set up by armorer Hannah Gutierrez and handed it to Alec, announcing that it was a “cold gun” — a safe firearm double checked for ammunition and a clear barrel. Obviously we know it was not. Clearly Halls did not check before his declaration, and neither did Gutierrez before him.

A lot of the blame has become more focused on Halls of late after multiple sources pointed to him as someone who was “flippant” about on-set safety regulations. Maggie Goll, a pyrotechnician who worked with him on the 2019 series of Into The Dark horror movies for Hulu, told NBC News that “safety meetings were nonexistent” under Halls’ direction and later told DailyMail.com he got in trouble for “failing to make safety announcements.”

Well, it turns out that was far from the only time he’d gotten in trouble over his attitude about safety in recent years. Also in 2019, per CNN, Halls was actually FIRED from a film called Freedom’s Path over a gun safety incident.

That movie’s production company, Rocket Soul Studios, told the outlet on Monday that a gun “unexpectedly discharged,” leading a sound crew member to require medical attention. This was not the same situation, obviously. The gun wasn’t loaded with a live round, and no one got shot. But there was clearly no question on that set who was to blame for safety precautions being violated. The studio said:

“Halls was removed from set immediately after the prop gun discharged. Production did not resume filming until Dave was off site. An incident report was taken and filed at that time.”

The company went on to clarify that Halls was fired — and made painfully aware of why:

“Upon wrapping production for the day, Dave Halls was officially terminated and given the specific reasons for his termination. Dave was very remorseful for the events, and understood the reasons he was being terminated. A new assistant director as well as a new armorer were hired for the duration of principal photography. Production of the film finished successfully.”

The only thing there that has us raising an eyebrow is the part about him being remorseful. It doesn’t exactly sound like he had gained a new appreciation and concern for safety in the two years between that project and this one.

Crew members being allowed to use prop guns from the film for target practice, loading them with live ammunition… Dear lord, that alone is just asking for an accident. But if the AD really just grabbed the gun and handed it off to an actor, ignoring the chain of custody — and announced it was safe without bothering to check…