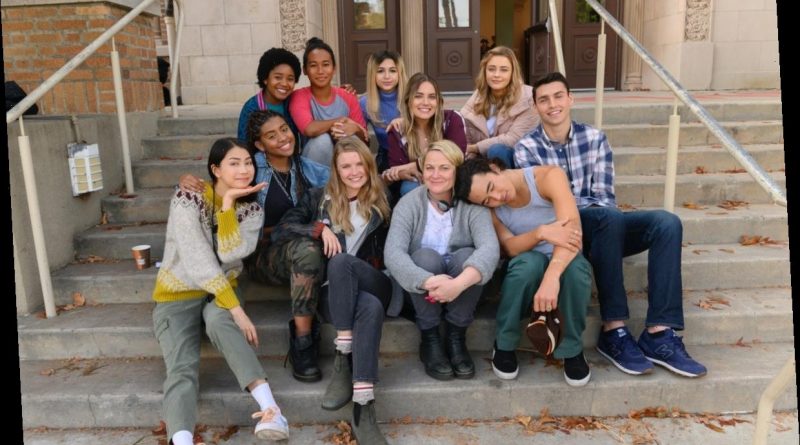 Moxie is Netflix’s newest teen movie title, a film based on the novel of the same name by Jennifer Mathieu. The film is the story of a high school feminist revolution, started by Vivian (Hadley Robinson) when she launches an old-school zine in her small-town school. Vivian is inspired by her mother, Lisa, who spent the 1990s as a rebellious riot grrl. But Lisa isn’t the only 90s era inspiration in the film. The songs on Netflix’s Moxie soundtrack are also a tribute to the riot grrl era.

The series may be a teen film, with a cast led by Hadley Robinson and Lauren Tsai, but the A-list name everyone will recognize is Amy Poehler, who plays Vivian’s mother, Lisa. Poehler was the one who optioned the book through her company Paper Kite and also directed it. But in the press notes shared with Elite Daily by Netflix, Poehler admits she wasn’t a riot grrl herself in the 1990s. (She wasn’t "cool enough.") But the soundtrack of the era inspired her, as did the artists in the riot grrl movement.

"At the time, those musicians were really influential because they were like a soundtrack for our collective suppressed rage, and they just rocked." said Poehler. "And Kathleen Hanna of Bikini Kill, who helped us a tremendous amount by providing music for the film, was a huge part of that."

Not that the soundtrack is all 90s jams. There’s plenty of newer artists, including Brandi Carlile and more recent punk acts like The Linda Lindas.

Here’s the full list of songs on the Moxie soundtrack.