• Mindhunter premiered on Netflix in 2017 and featured an FBI unit tasked with profiling serial killers
• The story is based on John E. Douglas’ book of the same name
• Douglas’ character appears in the series alongside several real-life serial murderers

Season 2 of Netflix’s serial killer-chasing series Mindhunter lurks around the corner (It drops on August 16, to be precise). If you weren’t already on edge, we’re here to comfortably remind you that just about everyone and everything you see on screen was totally, absolutely—no, we’re not kidding—real. Boo.

Here’s how fact and fiction converge. 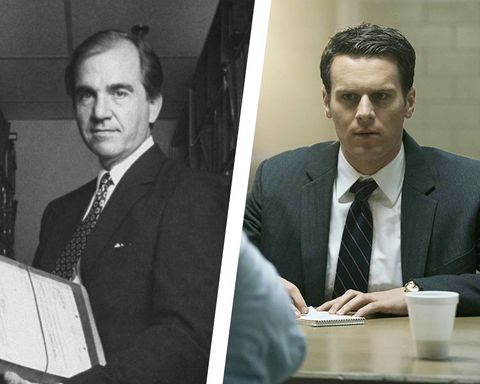 John E. Douglas joined the FBI in the early 1970s and went on to work in the now defunct Behavioral Science Unit (BSU). The BSU has since folded into the FBI Academy after the creation of the Behavioral Analysis Unit (BAU)–today’s Mindhunter equivalent, and the setting for CBS’ Criminal Minds.

During his time at the BSU, Douglas traveled around the United States interviewing serial killers (more on them below).

Mindhunter’s Holden, though based on Douglas, also combines historical roles of other FBI agents.

Both Holden and Douglas came onto the FBI’s Behavioral Science Unit in 1977, following their work as hostage negotiators. In the series, however, Holden alongside Bill Tench and psychologist Wendy Carr help form the unit. In real life, the BSU was formed back in 1972 by agents Patrick Mullany and Howard Teten, responding to increases in homicide and sexual violence.

Holden’s cross-country buddy-cop travels, however, remain absolutely true, and in the late ’70s, following these interviews, the real-life Douglas completed a serial killer database which would help inform FBI profiling and prevention efforts.

Douglas also worked on the “Atlanta child murders” case, profiling the killer. That case will be the basis for Mindhunter season 2.

Douglas’ partner on the serial killer road was FBI agent Robert Ressler. Ressler also wrote a book chronicling his experience in Whoever Fights Monsters and is often credited with coining “serial killer” during his work on the Son of Sam case.

In the series, Ressler finds personification in Bill Tench, who is a bit older than real-life Ressler was at the time—which was 40.

Burgess, like her fictional counterpart, really did aid FBI in their psychological profiling efforts.

Burgess’ study of rape in Boston lead her to consult on sexual crime for the bureau. During these meetings, she suggested Douglas and Ressler publish their serial killer findings. She then advised from Boston during the course of their future travels.

Unlike Carr in the series, Burgess never moved to Virginia. She is also not homosexual, as depicted on the show, but has said her role as advisor is accurately depicted. Burgess functioned as the unit’s methodological guide.

Season 2 will focus on the “Atlanta child murders” which occurred between 1979 and 1981. The suspect arrested and eventually convicted of the crimes was Wayne Williams. Williams was convicted of two murders but is believed to be responsible for at least 23 more. (Douglas disagrees, writing in Mindhunter on page 238 that evidence suggests Williams is responsible for several killings but not all the disappeared children.) Williams (60) maintains his innocence to this day. He is currently serving two life sentences.

Manson was teased in Mindhunter season 2’s recent photo gallery. One of the most notorious cult leaders in American history, Manson formed the over 100-people Manson Family, a group that followed some of his murderous orders, most notably the Tate-LaBianca killings.

Manson was sentenced to the death penalty in 1971, along with three other family members. During his serial killer interviews, Douglas did in fact interview Manson, saying that Manson tried to physically intimidate him despite being a full foot shorter.

Kemper was first arrested in 1964 for fatally killing both his grandparents. He was 15. At 21 Kemper was released, and between 1972 and 1973 Kemper would go on to kill 8 people, including 5 college students.

The 6’9” killer was given eight life sentences and incarcerated in California. During the 1970s Douglas and Kessler interviewed Kemper, who proved to be one of the smartest and most articulate killers they profiled.

Appearing during the opening scenes of the first season’s 10 episodes is an unnamed mustached Kansas man. In real life, the man depicted had at that time already began his 10-person killing spree, which would last until 1991. Rader wasn’t arrested until 2005, but Douglas and colleagues spent years hunting him. (“BTK” is a self-assumed name, standing for “bind, torture, and kill.”) He is currently serving 10 life sentences.

Arrested in 1969 for the murder of 4 women in Oregon, Brudos appears obsessing over shoes in the later episodes of Mindhunter season 1. Brudos’ foot fetish was real, and he would supposedly don high heels and pleasure himself after his murders. Brudos was abused by his mother when younger and first arrested at 17 after he abducted and beat a young woman. Brudos has since died in prison from liver cancer.

In season one, Ford and Tench briefly interview Risell, then serving time for the rape and murder of five women. The real-life Risell was also interviewed by Douglas and Ressler. He committed his first rape at the age of 14. By the time he was sentenced for the 5 murders, he was 18. He is currently serving his five life sentences in Virginia.

Speck is the character who, while being interviewed by Ford and Tench, tosses a pet bird into a fan. The real-life Speck who tortured, raped, and murdered eight Chicago student nurses in a single night in 1966 was given the death penalty, a sentence that was commuted to life imprisonment. Speck did in fact speak to Douglas and Ressler during their research, but he didn’t throw fan-throw the bird in their presence. He did, however, fan throw a bird, after a guard told him he couldn’t keep it, writes Douglas. Speck died of a heart attack in 1991.