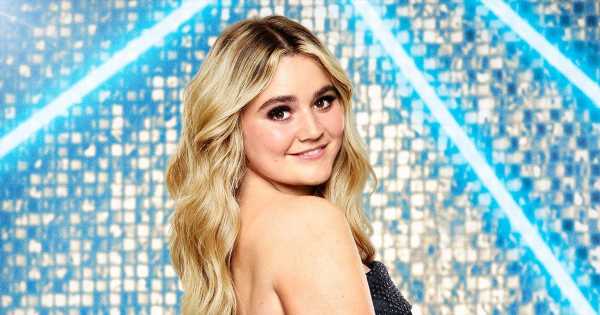 Tilly Ramsay has revealed that she is 'so sad' to miss the Strictly Come Dancing final on Saturday 18 December after testing positive for coronavirus.

The 20 year old, who was the ninth star to be voted off the BBC series this year, shared with her 1.2million Instagram followers how she 'will be watching from her sofa' as she cheers on AJ Odudu and Kai Widdrington, Rose Ayling-Ellis and Giovanni Pernice along with John Whaite and Johannes Radebe.

Alongside a snap of the three finalists, Tilly penned: "So sad to be missing the Strictly final – but sadly have tested positive for covid so will be watching from my sofa and cheering on the amazing finalists from home on Saturday night – wishing everyone lots of love & good luck x Tilly."

Tilly was the ninth star to leave the BBC series in November ahead of the quarter finals after she found herself in the dreaded dance-off with her 23 year old professional partner Nikita Kuzmin against Rhys Stephenson and his partner Nancy Xu.

During her appearance on the show, Tilly's father Gordon Ramsay broke down in tears over one of his daughter's performances as she danced a Samba to Dua Lipa's Levitating where duo scored 30 points from the four judges.

It comes after Robert Webb has also confirmed that he will not be returning to the dance floor for the final this weekend.

The actor, 49, withdrew from the competition in October for the sake of his health, but had not yet confirmed whether he would be making an appearance in the final with the other previously eliminated contestants.

The hit BBC One show usually features eliminated contestants that were voted out earlier in the series return for one last dance during the final ahead of one couple being crowned the winners.

However, Robert has now confirmed via Instagram that he won’t be appearing on the final, which is due to be broadcast this Saturday 18 December.

Posting an image of himself and former dance partner Dianne Buswell, Rob wrote: "Hullo! I seem to have switched from public to private mode and one of the effects of this is people will inevitably find their own ways to interpret my "silence".

"It isn’t really silence, of course. It’s just doing other stuff. But I thought I ought to pipe up because I won’t be in the group dance of the Strictly final this Sat and I didn’t want my absence (or my "silence" about it) to be taken as evidence of any kind of bad feeling towards the show.

"My love for Strictly is a season that is forever summer. However, the producers understood that when I had to stop, I had to stop completely. Dianne & Joe came over for lunch a few weeks ago and m’partner gets it. If I gave out a few more details about what the show had been doing to me physically & mentally, you wouldn’t be surprised that the offer of one more dance was politely declined.

"More generally, I’m sorry that my departure b******d up the format so there are only 3 couples in the final (a lot of angry Rhys fans out there – guys, you do know that if I’d tried to do week 4 but had then dropped dead during the show, it would *still* be a three-couple final, yeah?)

"So anyway, the headlines are: sorry about everything, I’m not doing the thing, I’m fine now btw, and do enjoy the final which will obviously be brilliant because they’re all brilliant. See ya! x."

Robert announced in October that he had pulled out of Strictly Come Dancing for the sake of his health, admitting he had "bitten off more than he could chew", two years after having open heart surgery.

Robert said in a statement at the time: "I’m extremely sorry to have to announce that I’m withdrawing from Strictly Come Dancing due to ill health.