Rising rap star King Von was shot to death at age 26 after an altercation in an Atlanta nightclub with members of Quando Rondo’s crew, according to multiple reports.  Timothy Leeks, also known as Lul Tim or Lil Tim was arrested for the shooting death of King Von, whose real name was Dayvon Bennett.

Lil Tim is a 22-year-old rapper and affiliate of Quando Rondo. Rondo is a 21-year-old rapper from Georgia, who is signed to NBA Youngboy’s Never Broke Again record label and Atlantic Records. He is best known for his songs Imperfect Flower, Scarred From Love, and I Remember.

Lil Tim appeared to be shooting a music video, according to his now-deleted Instagram page only hours before the shooting that led to King Von and two others being shot to death. The 22-year-old appears to be wearing the same clothes in images of the music video and the footage of the altercation at the Atlanta nightclub.

Lil Tim was shot during the altercation

Lil Tim has been arrested by Atlanta police as he receives treatment for a gunshot wound he sustained in the altercation at the Atlanta nightclub. 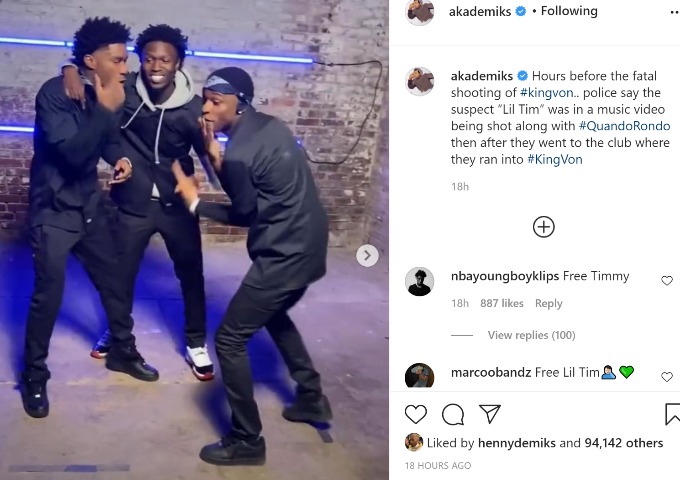 “Mr. Leeks is in police custody at Grady Hospital where he is undergoing treatment for a gunshot wound,” an Atlanta police spokeswoman said to The Atlanta Journal-Constitution adding, “The homicide of Bennett is closed with this arrest.”

Two police officers who were working at the nightclub noticed the shooting and exchanged gunfire with some of the people involved.

Leaked CCTV footage from outside of Monaco Hookah Lounge in Atlanta appears to show Von in a fight with an individual, who some observers have identified as rapper Quando Rondo, before a man, who is believed to be Lil Tim, appears to come from the other side of an SUV and fire several rounds into a victim that appears to be Von.

The 26-year-old was unarmed and the other two deceased victims from the shooting are affiliates of the late rapper, according to Hip Hop journalist Akademiks. King Von’s manager, who was shot in the leg at the nightclub, told Akademiks that the situation that led to the shooting was avoidable.

King Von moved to Atlanta from Chicago to avoid trouble, according to sources close to the rapper. He was signed to his childhood friend Lil Durk, who paid tribute to the Welcome to O’Block rapper before deleting his Instagram.

As previously reported, Von was in critical condition when he was rumored to have died. He eventually succumbed to his injuries. He is survived by his three children and his music.