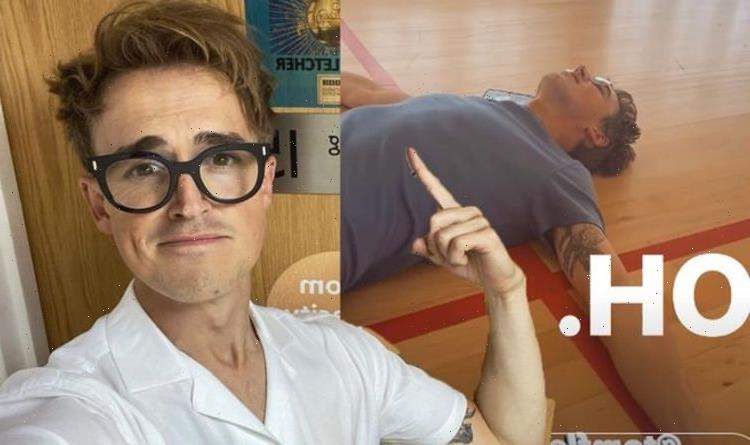 Strictly’s Tom Fletcher lays on the floor after completing training

Amy Dowden, 31, has posted videos on her Instagram Story, where Tom Fletcher, 36, shared a “worrying” update about his progress. The pair are currently on day five of rehearsals, preparing for Strictly 2021’s first live show on Saturday.

I feel weirdly calm, and I feel like that’s a bit worrying.

The Strictly professional posted the videos for her 234,000 followers to see.

In the videos, Tom is seen lying on the floor, looking exhausted.

Amy said to Tom: “How are you feeling Tom?

“End of day five of training.”

To which he replied: “I feel okay.

“I feel, um, I feel weirdly calm, and I feel like that’s a bit worrying.”

By this stage, Tom began to look at the camera, and put his hands behind his head, in a comfortable rest position.

Tom then had second thoughts about his nerves, and replied: “Yeah, it’s going to creep up on me I think.”

The Strictly professional ended the video, announcing the pair were now on their way to a McFly show as part of the band’s tour.

She then added another video to her Story, with Tom in the background with his thumbs up, while she mirrored his pose.

In the video, she reassured Tom: “You’re doing a good job.”

When it was announced on Saturday the pair would be dancing together on this year’s Strictly, fans were ecstatic, including McFly fan Amy.

“My strictly partner is the talented, lovely @tomfletcher.

“I totally wasn’t cool when we was paired up.”(sic)

“Best partnership ever, my winners and I’ll be supporting you from start to finish (hopefully lifting that glitterball).”

The BBC show hit the news recently, due to some Strictly professionals reportedly deciding against getting the Covid vaccine.

The pro dancer had her first jab early in February, as she suffers from Crohn’s disease.

Amy received cruel abuse for openly posting about it on social media.

She told BBC’s Morning Live: “I was sad because I was trying to put out a positive post that hopefully there is light at the end of the tunnel.”