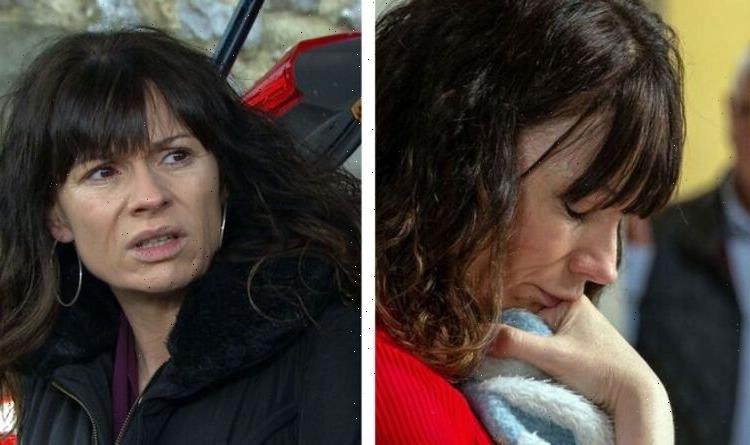 Lucy Pargeter’s Emmerdale character Chas Dingle was forced to step down as landlady of the pub earlier in the year, but Lucy is adamant that her real-life self would never share Chas’s devastation. She dismissed any speculation that she would mirror her character in real life when she revealed that she is far too “nosey” and “disorganised” to run a pub.

Branding herself incapable of competing with Chas’s on-screen skills for the role, she admitted: “I would be too nosey to work behind a bar.

“I would get stuck in someone’s conversation and then forget everyone else.

“I also don’t think I am organised enough to work behind a bar.”

However she had another surprise in store for readers of What To Watch, when she revealed that she had played the role in real life in her earlier years.

“I have done bar work when I was living out in Gran Canaria as a very small person,” she elaborated.

“I was dragging people into bars and supplying them with alcohol.”

She joked: “I was alright but think I drank more than I served!”

Though running a pub might not come as second nature to Lucy, she embraced the acting spirit when it came to channeling Chas on Emmerdale.

Chas was devastated earlier in the year when she realised her two-decade long reign as landlady of local village pub The Woolpack was about to come to an end.

The pub is the way she was first introduced to viewers when she debuted on Emmerdale back in 2002.

Years later, she upgraded from pulling pints by buying shares and becoming the Woolpack’s co-owner, along with original landlady Diane Sugden (Elizabeth Estensen).

Later, in 2016, Diane stepped aside, allowing Chas to take on the leading role.

However Charity, played by Emma Atkins, caused chaos when she took up a position at the bar too.

In fact, she became so renowned for her work-shy attitude and acid tongue that Chas felt she could no longer work with her.

Charity duly sold her share to her cousin Marlon (Mark Charnock) who’d infamously had a drunken and adulterous affair with her while his wife was away pursuing a Bollywood movie role.

As the pub started to struggle financially, it seemed as if malevolent businessman Al Chapman (Michael Wildman) might be able to save the day.

However he proved his true colours when, after his plan to transform the pub into a block of flats failed, he dramatically set fire to the Woolpack during the festive season of 2021.

Charity and her son Ryan then purchased it at auction in the hope of salvaging a successful business from the wreckage.

The pub has had an ill-fated history in the past too, after its roof fell in on Tricia (Sheree Murphy) during a storm back in 2003, causing her fatal brain damage.

The latest dramatic turn of events left Chas forced to abandon her beloved pub, although there’s always a chance she may one day return.

In the meantime, interested viewers can keep up to date with all the latest Emmerdale gossip on 7pm every weeknight on ITV, or catch up on ITV Hub.