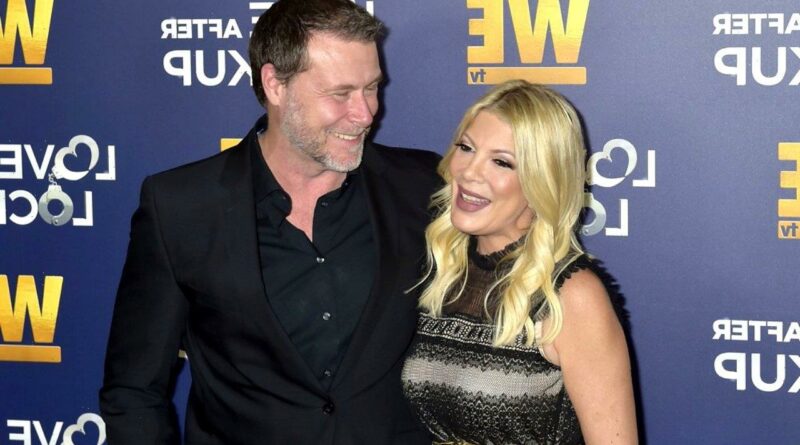 The Donna Martin of ‘Beverly Hills, 90210’ blames her husband’s work commitment for his absence from the holiday card after months of speculation that they’re headed for divorce.

AceShowbiz –Tori Spelling has offered an explanation to her husband’s absence from a family holiday card. After she unveiled the photo which features her and her five kids with Dean McDermott, some people were quick to notice that the actor himself was missing from the card.

“Dean must be ‘working’ out of town and couldn’t get home in time for the annual Christmas picture,” one curious fan wrote in the comment section. While the follower appeared to preemptively cast doubt on such explanation, Tori stressed in the comment that in “fact,” “@imdeanmcdermott was filming his new feature film in Canada” when the picture was taken.

The holiday card features Tori and her five children posing in their farm. She holds a chicken as other kinds of cattle, such as sheep, goat and pig, are seen around them. The card is signed, “With love, from our farm to your home!”

The 48-year-old actress wrote in the caption of the sponsored post, “It’s that time again. And it’s a winter wonderland at my house! Thank you, SimplytoImpress.com, for once again bringing our happy family to life on my favorite holiday card yet. No one compares to @simplytoimpress.”

“Choosing just the right design was fast and easy, and I was able to select a special trim shape and customize the message in no time,” she went on promoting. “They have a professional designer review every card design to make sure it’s perfect. And delivery was super fast! This is a card our friends and family will opening and putting on display! #familyiseverything #ad #lovemycard.”

Tori and Dean have been hit with split rumors amid their financial woes. Fueling the divorce speculation, the two were recently spotted ditching their wedding rings on separate occasions.

In September, however, Dean explained on “Feminine Warrior” podcast that Tori forgot to put her ring back on after washing her hands when she was seen without it on. As for his missing ring, he said that he lost his own wedding band while playing golf.

“I lost my utility ring and then somebody saw that [and said], ‘He doesn’t have his ring,’ ” the “Due South” star said at the time. “So, now, everybody’s in a titter, so I’m like, ‘Forget it, I’m not going to replace it. Just let them think it.’ “