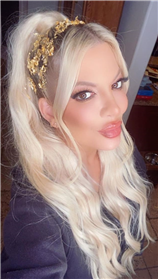 It’s been unofficially over for a while.

Now, it looks like Tori Spelling is ready to pull the trigger on divorcing Dean McDermott.

That’s not the only change that she’s considering making.

After so many years of marriage to one man, is it time for a fresh set of revenge boobs?

Tori Spelling is not the only famous woman who was cheated on by her husband and things were never the same again.

She was a recent guest on Jana Kramer’s Whine Down podcast.

Instead of discussing their shared struggles with “sex addicted” husbands, Tori touched on a different subject.

Tori confessed to Jana that her current breast implants need to go.

It’s not that she wants to de-boobify herself or downsize.

Breast implants do not have expiration dates as we normally think of them.

That said, they do not last a lifetime.

Tori told Jana that she will have to remove her current implants — or rather, have a surgeon do this.

She will then need a new boob job after that to reconstruct her breasts.

Tori spoke on other aspects of her body.

Tori confessed that she is “still trying to lose the baby weight.”

Tori and Dean have five children together. Each pregnancy and childbirth changes the body.

She characterized the post-baby body experience as a “process.”

Tori admitted that even the people who try to encourage her end up being less helpful than they intend.

She gets told “but you look great,” she revealed.

“You’re used to your body a certain way your whole life,” Tori expressed, “and then it radically changes.”

“My body is different after 5 [children],” Tori noted.

She added: “I still want my body back.”

Everyone deserves a body that meets their preferences.

Of course, boob jobs are something that Tori and Jana have in common.

“People still give me crap about my boob job,” Jana expressed.

Tori added: “I need help on that!”

This is when Tori expressed that she was taken aback when learning that her boob job needed to be redone.

“No one told me when you get them done,” Tori lamented, “that you have to get them redone in 10 years.”

Her implants weren’t just “expired,” as she put it — they were recalled.

Honestly, a divorce isn’t a terrible time for a boob job.

Most people who undergo breast augmentation surgery do so because they will feel more confident.

When in your life do you need confidence more than when you start dating again for the first time in many years, now as a mother of five?

On the other hand, Tori’s financial woes that plagued her marriage may increase during her divorce.

But there are notably exceptions, including among celebrities. Does Tori have a boob budget these days?

She might not really have a choice right now, because implants should not be left in the body for too long.

Hopefully, Tori will have better luck with her next boob job.

Meanwhile, the rest of us will wait for her and Dean to actually confirm that they are getting a divorce.