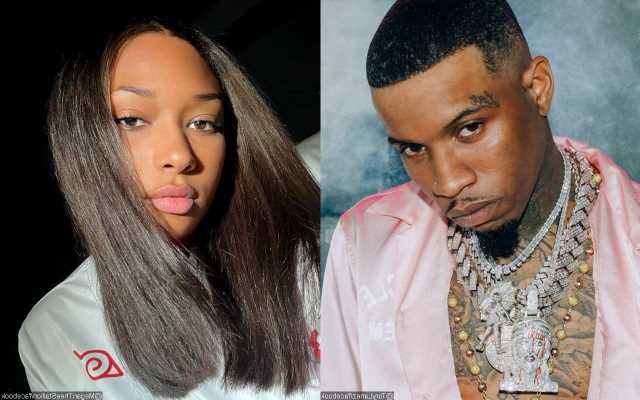 After the Canadian rapper was found guilty of shooting the Hot Girl Meg in July 2020, celebrities and fans react on social media, prompting ‘Damn Tory Lanez’ and ‘Happy for Meg’ to become trending topics.

“We are shocked by the verdict,” George said in a statement to The Shade Room on Friday, December 23. “There was not sufficient evidence to convict Mr. Peterson [Tory’s real name, Daystar Peterson]. We believe this case was not proven beyond a reasonable doubt. We will be exploring all options including an appeal.”

On Friday, Tory was found guilty of three charges in the 2020 July shooting that left Megan injured. He was convicted of assault with a semiautomatic firearm, having a loaded unregistered firearm in a vehicle and discharging a firearm with gross negligence.

Upon learning of the verdict, his dad Sonstar Peterson leaped up and began shouting in the courtroom, “This wicked system stands judged before God almighty!” He shouted as deputies closed in on him. He then pointed to the two prosecutors in the case and yelled, “You two are evil, wicked people. You know exactly what you did.” Deputies then removed him from the courtroom before he later gave an emotional statement outside the building.

Tory’s 6-year-old son, whom Tory always brings to the courtroom as he’s the rapper’s “support system,” cried in the front row after Sonstar was ushered out for causing the chaotic scene. Tory reportedly was looking at the child and patted his chest to reassure him.

Tory was spotted leaving the court in handcuffs wearing powder pink pants, a white turtleneck and a jacket. The 30-year-old emcee could face up to nearly 23 years behind bars. In addition, there’s a “strong likelihood” he will be deported back to his home country of Canada.

Following Tory’s conviction, social media users rushed to Twitter to share their thoughts, prompting “Damn Tory Lanez,” “Happy for Meg,” “No DNA” and “JAIL” to become trending topics. Also reacting to the guilty verdict were some celebrities, including Cardi B.

Cardi showed support for Megan by hinting that she’ll help her if she plans to sue some blogs for defamation. “Get Ms. Lisa on the line for Megan @iamcardib. She got quite a few blogs to sue for defamation,” one Twitter user wrote to Cardi. Lisa Moore is Cardi’s lawyer who helped her win two lawsuits this year. In response to the suggestion, Cardi said, “Referrals will be [sent].”

Baby Tate turned to Twitter to express her sympathy to Megan. “I can’t imagine the nightmare that his past two years has been for you @theestallion and I know that this verdict won’t erase that,” she tweeted. “But I pray it helps you on your journey to finding peace and healing! We love you [black heart emoji].”

Hazel E, in the meantime, reposted The Shade Room’s Instagram post with a headline that read, “BREAKING: Tory Lanez Has Been Found Guilty On All Charges” to her Story. She then simply captioned her Story, “Good Job! Justice for @theestallion.”

Benzino also reacted to the verdict, dissing Tory for paying his legal team a whopping amount. “Paid a lawyer hundreds of thousands for a guilty verdict? nah fk that I’d have to get refund,” he tweeted.

Meanwhile, Melii, who worked together with Tory on their collab “Slow For Me”, showed support to Tory. “Stop texting me. This is not no celeb to me Hollywood s**t to me. Tory to u Daystar to me. Stop texting me,” she went off on Instagram.

“For a witness to say he saw a woman shoot first and then the male take the gun n shoot in the air. That should’ve been all n***as needed to know,” she defended Tory. “He took that gun from her and emptied it. he was lit so he ain’t do it taking out the magazine. But I stand on injustice. Unfollow me.”