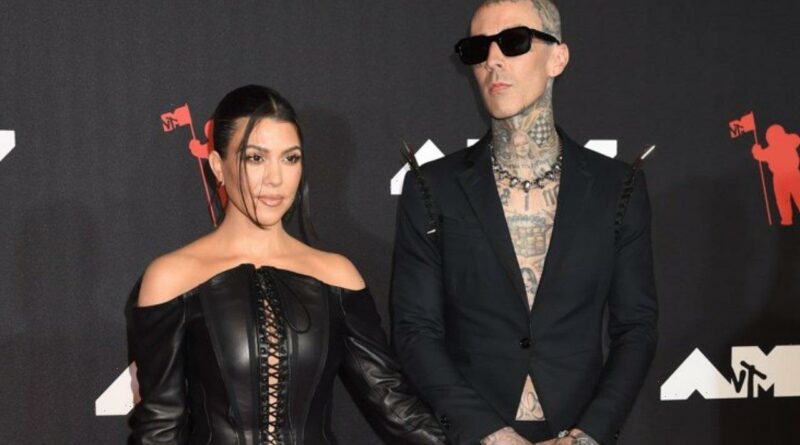 The former ‘Keeping Up with the Kardashians’ star was photographed wearing the shirt when she was strolling around Venice with her fiance back in September 2021.

AceShowbiz –Travis Barker won’t let anyone say negative things about his fiancee, Kourtney Kardashian. When addressing backlash over her Cannibal Corpse shirt that she wore months prior, the Blink-182 drummer described the criticism as “the lamest s**t ever.”

The musician offered his two cents in a recent interview with Revolver. “To speak on that, that’s the lamest s**t ever. Obviously my fiancee doesn’t listen to Cannibal Corpse, but I do. I grew up loving them. For [someone] to mention that in a negative light – f**king lame, you know?” he first argued.

“She’s wearing it because she’s cold. She’s not claiming she knows every song. But I do! I bought every album, and I learned how to play every album,” the 46-year-old added. “I grew up a punk-rock kid, [but] everything with punk rock – ‘I’m more punk than you’ – just f**k all that. Be stoked that people are into music. Music is beautiful! It changes people’s lives. It creates the best memories. Just celebrate it, you know?”

“But, yeah … I have a gang of Cannibal Corpse T-shirts. [Laughs] I still love them,” he continued. “I have a gang of King Diamond T-shirts and rare Slayer shirts because I f**king love those bands. I grew up on them. Even though I’m, you know, whatever the world wants to view me as – ‘Oh, that’s blink-182’s drummer’ – actually that guy was playing in a garage with a bunch of speed-metal kids listening to D.R.I. and S.O.D. I enjoyed every f**king minute of it.”

Kourtney was pictured wearing the shirt when she was in Venice with Travis back in September 2021. Her stylist Dani Michelle told Vogue that the reality star borrowed it from her fiance’s closet. Dani said, “Kourt has told me before that his closet is an archive itself. She can pick any T-shirt to wear and it’s the softest, coolest thing ever.”

However, many were not pleased to see the Poosh founder rocking the piece. Even former Cannibal Corpse frontman Chris Barnes expressed his displeasure on Twitter, slamming her and the father of two for being “posers.”