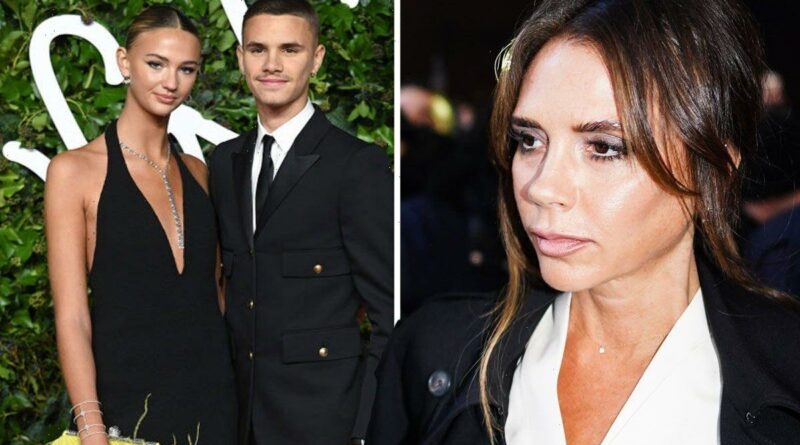 Victoria Beckham welcomed billionaire heiress Nicola Peltz into her family after her eldest son Brooklyn Beckham tied the knot with his partner this month. It has now been claimed that her son Romeo Beckham, 19, is “ready to marry” his girlfriend and British model Mia Regan, also 19.

Romeo’s girlfriend is said to be very different from Brookyln’s wife and Victoria is thrilled to have the young model as her “protégé”.

It comes as the Spice Girls bandmate had dressed a number of celebrities and close family members for Brooklyn’s nuptials including Romeo’s partner Mia.

Star-studded guests watched the young couple get married at an extravagant ceremony at Nicole’s family’s £76 million beach house in Florida.

According to some reports, while Victoria was incredibly proud to witness her son get married, it has been claimed she found “it difficult” having to take a back seat on the big day.

It was reported that Nicola’s luxury wedding was completely organised by her family and her stunning gown was not a Beckham design.

The newlywed’s stylist, Leslie Framer, said the wedding was a cutom-made couture gown by Valentino.

Romeo, who is David and Victoria’s second eldest son, is believed to have started dating the British model, Mia, back in 2018.

She attended Brooklyn and Nicola’s star-studded wedding in a dress designed by none other than Victoria.

Romeo is said to be utterly besotted with his girlfriend Mia and has been claimed she is very close with his famous mum.

However, a source claimed Romeo is holding off on proposing so soon after his big brother’s wedding to billionaire’s daughter and actress Nicola, so as not to steal their thunder.

“Mia is close to Romeo’s mum Victoria. It was clear the couple want a long-term future together and have already spoken about being soulmates,” said the insider.

“Marrying quickly and young seems to be in the Beckham tradition.

“They are besotted with each other and are definitely in it for life. They also talked about how much they want a big family and can’t wait to get started,” they added to The Mirror.

In addition, Mia has modelled for Victoria’s VVB collection.

The pair have collaborated together to promote Victoria’s fashion brand on social media and the designer even included the Tik Tok star’s artwork in a 2020 drop.

In February this year, the pair were spotted at London Fashion week on the front row of designer Supriya Lele’s AW 2022 show.

Meanwhile, Nicola is still in marital bliss as she recently shared some pictures taken by her mum Claudia from her big day on Instagram.

The gorgeous snaps show Nicola getting her hair done.

The first picture, in black and white, sees Nicole looking stunning with her makeup perfectly applied whilst her hairstylist, Adir Abergel, can be seen hard at work.

The second snap, in colour, shows the 27-year-old bride with her hair in a gorgeous ponytail with her bangs.