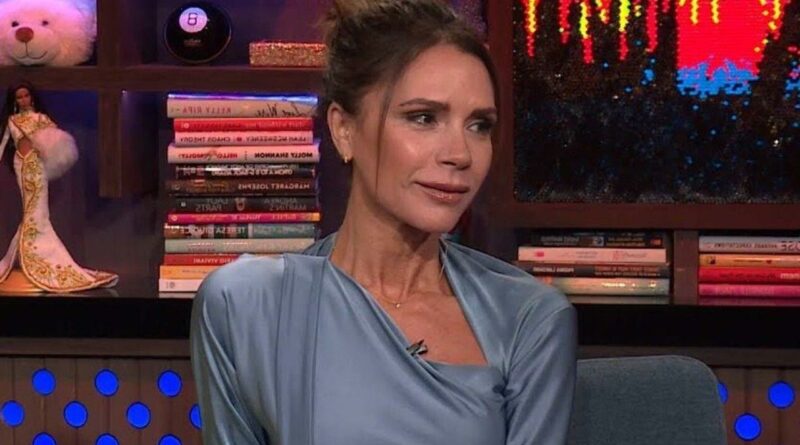 The Posh Spice insists the matching outfits she and her hubby David Beckham donned at New Year’s Eve Party in 1999 were ‘hot’ although she admits being haunted by the look.

AceShowbiz -Victoria Beckham claims she is ‘haunted’ by the matching black leather outfits she donned with husband David Beckham in 1999. The admission was made by the 48-year-old former Spice Girl on Monday, October 24 episode of Andy Cohen‘s Bravo series “Watch What Happens Live” while she was appearing alongside actress Anne Hathaway.

Victoria was shown an image of the matching black leather pantsuits she and David, now 47, wore for their Millennium New Year’s Eve Party in 1999 in a segment looking back at Victoria and Anne’s old outfits called “So Posh or Oh Gosh”. “I still… I mean it haunts me. It does haunt me, but I love it,” Fashion designer Victoria said.

“It was hot. We were wearing Gucci. It was a Versace dinner, which is inappropriate in itself. But, you know, we really considered those outfits. I mean we really talked about it. There was a naivete to it that was just so sweet… everybody pulls it out of the bag.”

On the show, Victoria also revealed there is no chance of a full Spice Girls reunion will happen. When a viewer asked if a full reunion of the Spice Girls might happen possibly at next year’s Glastonbury festival, Victoria said, “You know, I had so much fun being in the Spice Girls, but, you know, I think that now with everything else that I’ve got going on with my fashion and my beauty line, four children, you know, I just – I couldn’t commit to that.”

“But I had so much fun in the Spice girls. I love the girls. I really, really enjoy singing Spice Girls when I’m doing karaoke, but I think I’d better leave it there.”

She also denied talking about the chance of appearing with the rest of group as a hologram – about which Anne said, “We’re scheming about how to get you onstage… we’re doing it for the children.”

Victoria also listed her top five Spice Girls songs as – from one to five – “Who Do You Think You Are”, “Too Much”, “Spice Up Your Life”, and “Goodbye”.