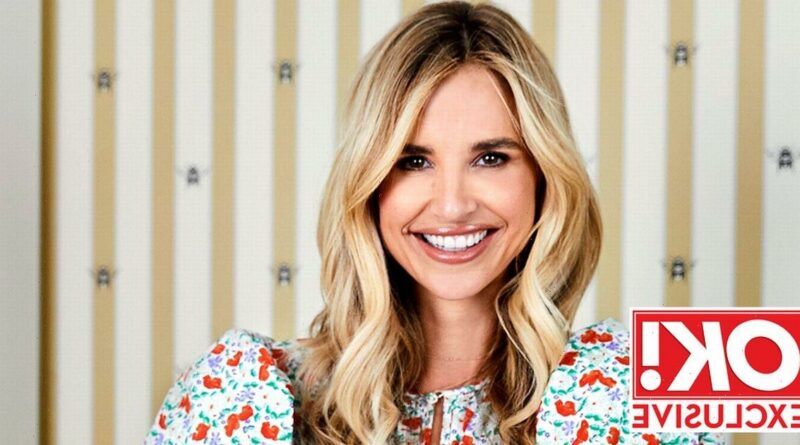 Vogue Williams has so much on her plate that we feel exhausted just thinking about her daily schedule. Not only is the Irish model a doting mum to Theodore, four, Gigi, two and five-month-old Otto, she has so much work on, we’re not entirely sure when she sleeps.

Luckily for Vogue, 36, she likes going to bed at 8pm and tells us that her husband Spencer Matthews, 34, is “really good” at supporting her. “If I need him to help with anything, he always will,” the 36-year-old explains, as she settles down to talk to us about the range she’s been working on for I Love Wallpaper.

But it’s not just homeware that the DJ and presenter has been focusing on. She’s also been working on a new show, Send Nudes: Body SOS, and her successful podcasts My Therapist Ghosted Me and Spencer & Vogue, which she presents with her husband.

So how does Vogue – who met Spenny on The Jump in 2017 – juggle it all? “I really love being a mother. But I also really love, love my job. So it’s nice to be able to do those with such amazing support along the way,” she explains.

Here, Vogue opens up about her tricky pregnancies, why Gigi is feeling a bit left out at the moment and why she and Spencer have ups and downs just like everyone else…


Hi Vogue. How are you finding being a new mum again?

I love the new-mum phase. I love that Otto is with me all the time. I have my first day away from him and the kids in three and a half months tomorrow – I’m going to Edinburgh to DJ. I’m like, “What am I gonna do?” It kind of makes me nervous leaving.

Is there anything new you’ve learned?

It has been really difficult because, obviously, I have the other two kids. And Gigi was so used to having so much attention. I think she is going through a little phase, so I have been trying to spend as much time as I can with all of them and I’m now trying to do separate things with each of them. At the moment, I’m just kind of focusing on Gigi because I think that she’s feeling a little bit left out.

Otto was probably the easiest. I quite enjoy the whole birthing process. It’s probably because I have such difficult pregnancies.

Why was the pregnancy so hard?

I was sick every day for so long and you don’t realise how sick you are until you’re not sick any more. The day after Otto was born, I was like, “Oh my gosh, I haven’t felt like this in so long,” because you get so used to feeling sick.

How have Theodore and Gigi handled having a baby brother?

They’re besotted. They’re obsessed. Gigi has gone a bit backwards now, she keeps saying she’s a baba. Theo absolutely adores him. It’s crazy but Theo and Gigi are best pals. So we’re just waiting for Otto to get to that age where he’ll be old enough to play with them.

Gigi just turned two. Did you throw a party?

Gigi had a terrible birthday! I planned this party for her but I cancelled most of it because everybody was away. Spenny and I took her to the farm but it wasn’t what she wanted to do, bless her. The whole morning she was desperate for us to sing Happy Birthday, and when we did it, she bawled her eyes out.

What have you learned about being a mum?

Every day is different and the lack of sleep is intense. But I’m a fan of going to sleep before 8pm so it’s not the worst thing I have to do.

Spenny is really good. As I’m breastfeeding, I do the nights by myself. The other night, I was shattered. He was with Otto and when he woke up he passed him to me and he wasn’t settling, but him being there made all the difference.

Working together kind of feels like we are having a date night as we get time alone and we get to sit together in silence. We get to have a chat about fun topics, it’s the best.

It’s so nice to hear that. But everyone goes through their ups and downs. We do have our disagreements, but we are best pals. We just really enjoy each other’s company.

When did you know you wanted to be with Spencer forever?

As soon as we met on The Jump, I remember just thinking that we’ll be really good friends. I rang a couple of friends and they were like, “Did you fancy anyone on the show?” And I was like, “No, but this guy is really sound and he’s really lovely and we’ll always be friends.”

I’m delighted for Jamie. He’s hilarious. He’s a really nice person. Sophie [Habboo] is gorgeous and so nice. We’re delighted they’re getting married and will be there cheering them on.

Was it a surprise?

I was kind of expecting it. I think he’d spoken to Spenny about it before but he didn’t tell me. They get on so well, Jamie and Sophie.

Tell us about your I Love Wallpaper collab…

I Love Wallpaper was a dream to work with – a lovely crew. Everyone was so collaborative and open to my ideas. I’m obsessed with homeware, I think everyone is deep down. We spend so much time in our homes and you want it to be nice. I wanted to create a collection of wallpaper and wall murals that could be used in any room, and I feel like we’ve captured that with the 10 designs. I’ve already put the Bee Happy wallpaper up in my house!

The I Love Wallpaper x Vogue Williams Edit is available now at ilovewallpaper.co.uk