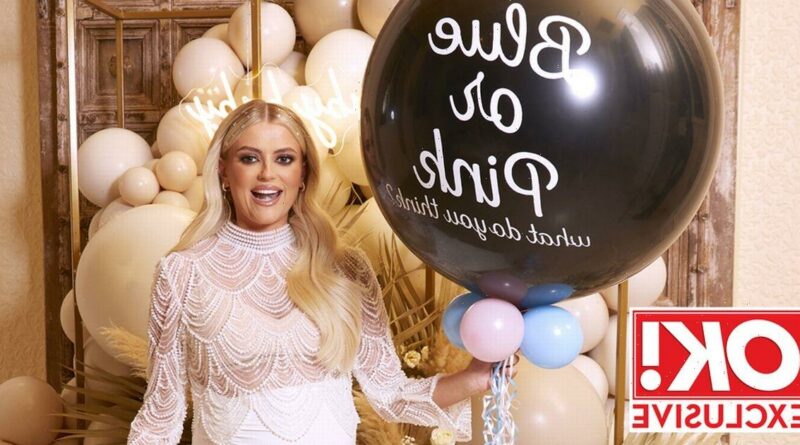 Actress Lucy Fallon has exclusively revealed the gender of her first child with footballer Ryan Ledson.

The star – who is currently 33 weeks pregnant and due to give birth on February 3rd – popped a big balloon with the words, ‘Blue or pink? What do you think?’ written on it behind the scenes at her recent baby shower.

As hundreds of sparkly blue decorations burst out, Lucy said: “I can now exclusively reveal with OK magazine that we are having a boy!”

Lucy – who played Bethany Platt in Coronation Street for five years – and Ryan celebrated the baby shower at Liverpool’s The Shankly Hotel, surrounded by 100 friends and family, including past and present Corrie stars.

At the time, they opened it at home in front of close friends and family, but Lucy said that even prior to that, she felt certain she was expecting a boy.

Lucy believes Ryan, who’s a midfielder for Preston North End, is chuffed their firstborn is a boy. She said: “I think he’s secretly buzzing it’s a boy.

“I think when he’s six months old, he’ll have him in football boots, before he can even crawl. He’ll be like, ‘Come on, get kicking that ball!’”

The star also revealed they have come to an agreement on a name for their son, which she describes as a mixture “quirky” and “traditional”.

Lucy said: “I like more quirky names than Ryan, who likes a more traditional name.

“So the name we’ve chosen is in between. We’ve both agreed on it and both really like it. Our family knows about the name and everyone likes it.”

However, she went on to reveal that the name they had decided on if the baby as a girl can’t be used in the future now as it’s quite similar to the name they’ve agreed on for their son.

“If we ever had a girl, we can’t call her the name we had because both of the names are like the same but with a different first letter. It would sound like we’ve got two dogs!”

When she was 22 weeks pregnant, Lucy opened to OK! about feeling anxious as she had suffered a miscarriage last March, plus she has a heart-shaped uterus, which can cause complications, such as an increased risk of miscarriage and increased likelihood of a C-section.

But she reveals that she is feeling less stressed in her third trimester.

She said: “I think the anxiety has disappeared a little bit. I’ve been having a lot of checks and scans.”