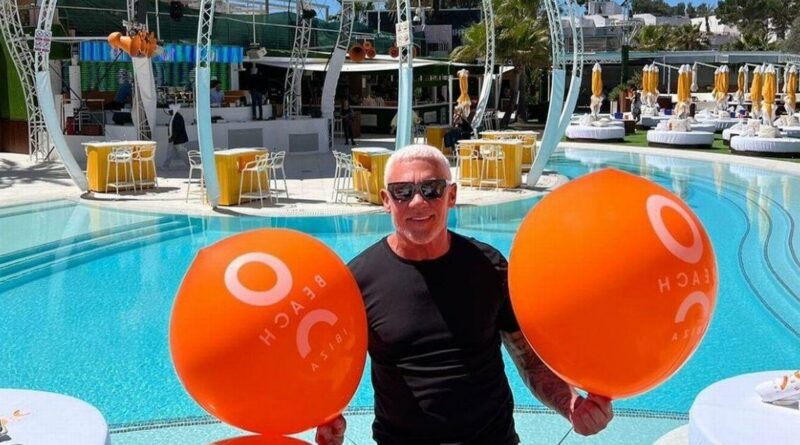 Wayne Lineker was spotted cosying up to his former Celebs Go Dating co-star Chloe Ferry while he enjoyed a sun-soaked birthday party celebrating his 60th in Ibiza.

The star appeared to have an incredible time dancing away at the famously star-studded O Beach club and posed for a variety of snaps posted on his Instagram.

In one image, Wayne showed off his friendship with the 26 year old Geordie Shore star as they cuddled up for the camera.

Chloe, in a sheer red dress and oversized sunglasses, gave her best pout with one arm wrapped around the birthday boy.

Wayne posed in a black T-shirt and matching sunglasses as he grinned next to a bar.

The pair were previously rumoured to be involved romantically.

As well as Chloe, a whole host of reality TV stars and social media influencers joined Wayne for the celebrations.

Wayne, who is the younger brother of famous footballer Gary Lineker, 61, seemed to be having a whale of a time as he enjoyed chatting and taking selfies with various fans, as well as a host of beautiful ladies donning their best Spanish bikinis at the club.

The star also shared snaps holding a selection of bright orange balloons from the epic beach club as he posed in front of the pool bar in white cut-off shorts and a glowing tan.

He had shared hopes Gary would make a "surprise" appearance earlier on this month, as the two brothers have long had a tumultuous relationship and have been estranged in recent years.

Wayne told his followers he believed "life is too short" amid hopes they can one day reconcile.

"If there was one person in the world I would love to surprise me at my 60th birthday party next week @obeachibiza it would be this man. I don’t think it’s too difficult to work out we’re not as close as we were #lifestooshort #brothers," Wayne shared alongside a throwback snap of the pair.

Sadly, the footballer-turned-pundit was nowhere to be seen amid a slew of photos documenting the reality star's birthday party.

Despite that, Wayne grinned his way through the celebrations, and captioned one fabulous selfie: "Happy birthday to me #waynes60th."

For all the latest TV and showbiz news, sign up to our daily newsletter here.