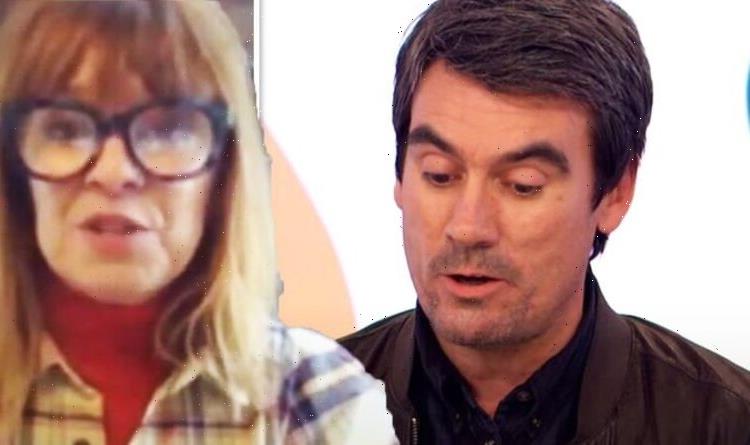 Emmerdale star Jeff Hordley’s wife Zoe Henry has opened up about the “weight of what’s going on” at the home she shares with her husband-of-19-years and their two children. Appearing on the Lorraine show on ITV this morning, the star, 48, spoke candidly about her relationship with Jeff, 52, before admitting that they both like their “separate existences” on the set of the soap.

However, the mother-of-two confirmed that she and Jeff still practice their lines for the programme together.

Zoe said: “We often do line learning together but, actually, this time, where Jeff’s been amazing, is actually taking the weight of what’s going on at home.”

She added that her spouse is currently managing domestic activities before they prepare to swap hectic filming schedules.

She went on: “Obviously we’ve got two kids, two dogs, we’ve got an allotment.

“So he’s just managing that and he’s about to get busy as I quieten down, so we’ll swap the baton there.”

Earlier in the interview, Zoe set the Scottish ITV presenter right when she stated that the pair met on the set of Emmerdale in 2001.

Lorraine asked the star: “Of course, in real, true life you are married to Jeff who plays Cain, of course.

“But you guys, you met on the set in 2001, but originally knew each other from drama school.”

But Zoe then set the record straight.

She corrected Lorraine: “We got together at drama school, we’ve been together for 28 years.

“So we didn’t really connect on set, we were together for the 10 years before that as well, we got together in ’94 unbelievably.

Lorraine chipped in: “They said it wouldn’t last, and look what happens!”

She went on: “You don’t really have much to do with each other in Emmerdale though, do you?”

Zoe responded: “No, which is great,” before she and Lorraine fell about laughing.

She continued: “It just means we have a very, sort of, separate existence at work and I think we both appreciate that and like that.”

The duo have been married since 2003.

They share two children together, daughter Violet and son, Stan.

Zoe has had a permanent role in the show since early 2010.