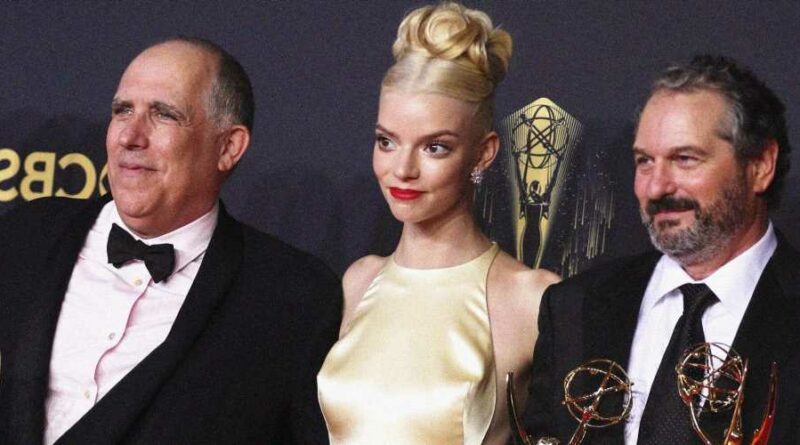 Good morning and welcome to another edition of Men Being Cringe. Today's episode is brought to you by men behind The Queen's Gambit, who, while accepting their Emmys last night from a circus tent in Los Angeles, made us all want to dig our thumbs into our own eyeballs.

First up was director Scott Frank, who is being "roasted" according to the New York Post and Twitter, for stretching what should've been a 45-second acceptance speech for Outstanding Directing for A Limited Series into a never-ending monologue, during which the orchestra attempted to play him off three times. (Rumor has it he's still giving the rest of the speech to a hostage Starbucks barista this morning.)

But it was executive producer William Horberg, who accepted the award for Outstanding Drama series on behalf of the cast and crew of The Queen's Gambit, who may have usurped the title of Most Cringe Speech from his own colleague.

"What can I say?" he said, gesturing to star Anya Taylor-Joy. "You brought the sexy back to chess, and you inspired a whole generation of girls and young women to realize that patriarchy has no defense against our queens."

Outstanding Supporting Actress nominee Moses Ingram was even caught on camera uttering the words "what the fuck?" on behalf of women everywhere.

You can rest assured that despite Horberg's self-congratulatory attitude and dismissive "sexy back" comment, Taylor-Joy is aware of the impact of her performance as a complex, multi-faceted character. In her October cover story for InStyle, Taylor-Joy described her meaningful connection to Beth as "esoteric," and an example of how people don't always know what "box" to put her in — a small part of what made her performance way more than just sexy.

"It is so much fun to be able to pick apart a different person and go, 'Oh, how am I going to make myself either bigger or smaller to fit into their shoes?' You end up working out some of your own shit that you didn't even realize that you needed to work out because you're clearly connected to that person for some reason. It's very esoteric and wanky, I apologize," she said. "But yeah, I don't appreciate boxes. I don't think that is helpful to anybody or a very intelligent way of looking at human beings."