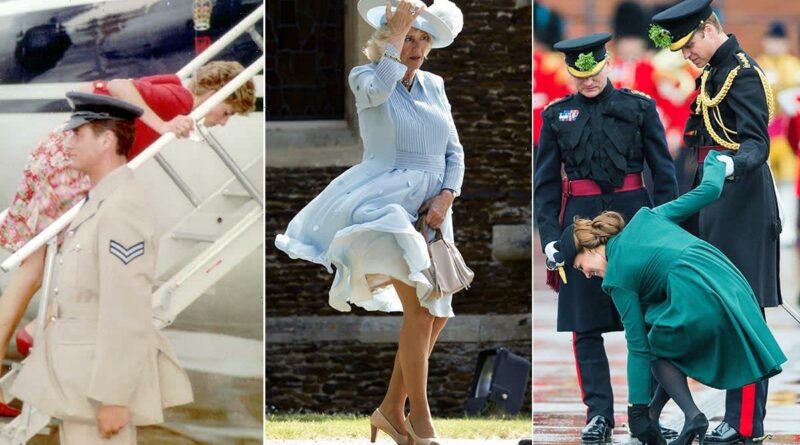 With all of their poise, grace and seamless public appearances, even the royals are prone to suffering some faux pas in public!

No matter how well prepared they are, mishaps can still happen – whether it’s battling inclement weather or suffering wardrobe malfunctions.

PHOTOS: 17 times the royals have cried in public

Take a look at some of the royals’ most relatable moments…

In July 2020, King Felipe of Spain accidentally forgot to put his face mask back on after delivering a speech at a state tribute to victims of the coronavirus pandemic at the Royal Palace in Madrid. His daughter Princess Leonor was seen on camera gently reminding her dad to wear his face covering. Felipe appeared to thank his daughter for the reminder as he took his mask out of his jacket pocket.

LOOK: 16 times the royals were seen in unexpected places

During her royal tour of Australasia in 2018, Meghan Markle made her much-anticipated arrival in Tonga with Prince Harry. The Duchess looked gorgeous as she disembarked the plane, dressing her baby bump in a red Self-Portrait number. But some eagle-eyed fans noticed that she’d made a small mistake with her outfit, by accidentally leaving the return label on the dress. The label could be seen attached from inside the skirt of her dress, hanging just beneath the hem. 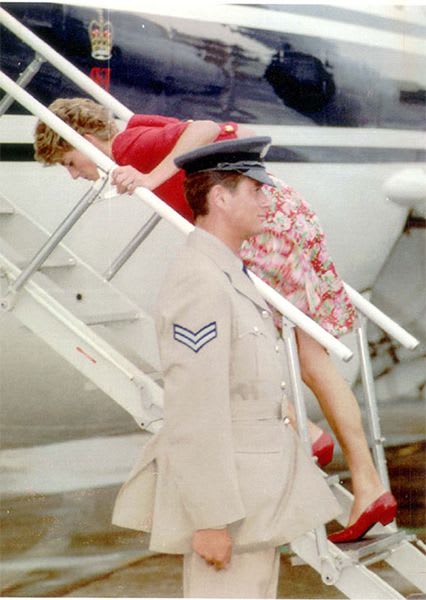 Princess Diana fell up the plane stairs in 1991 during a visit to Pakistan. Having slipped and grabbed the handrail to steady herself, Diana’s bad day only got worse when her flight was delayed for an hour because of a rainstorm. The windy weather also caused havoc with her wraparound skirt, so we’re guessing she was glad to finally get onboard the plane.

The Princess of Wales 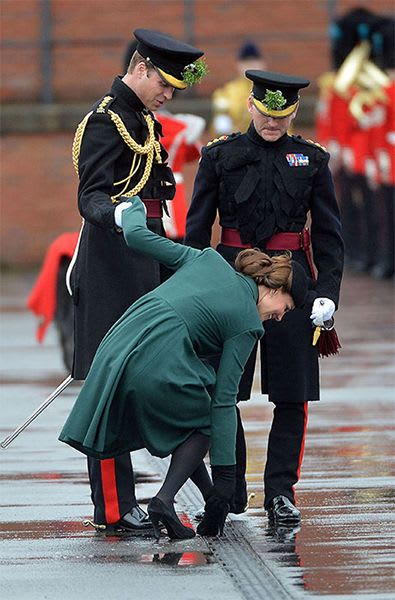 Mistakes happen! Kate grinned as she attempted to pull her heel out from a grate while visiting Mons Barracks Aldershot at the St Patrick’s Day Parade in 2013. Holding Prince William’s hand for support, the Princess was quickly able to free her shoe before carrying on with the official visit. 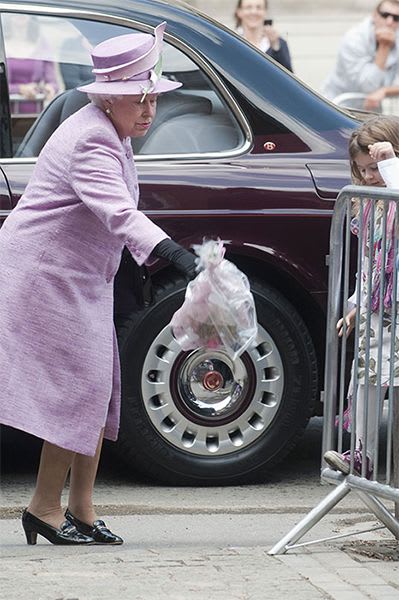 The late Queen was used to accepting bouquets of flowers, but on one occasion, she struggled to keep control of an arrangement! Her Majesty fumbled with a bouquet while marking the 150th anniversary of the Eton Combined Cadet Force at Eton College in 2010. No doubt one of her aides was quick to retrieve the flowers on her behalf. 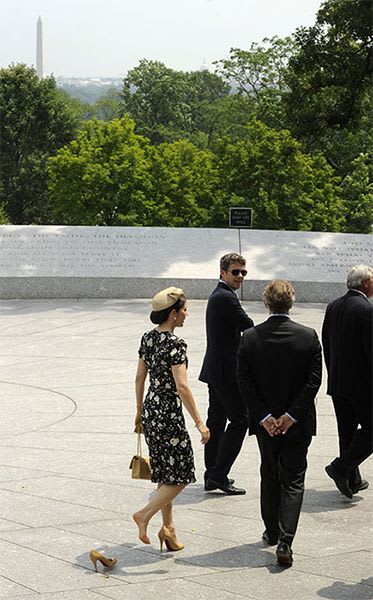 Heels can be so tricky! Crown Princess Mary of Denmark lost her shoe while visiting the grave site of President John F. Kennedy by the Washington Monument at Arlington National Cemetery. The princess, who was accompanied by her husband, Crown Prince Frederik, realised her mistake just a few moments later. 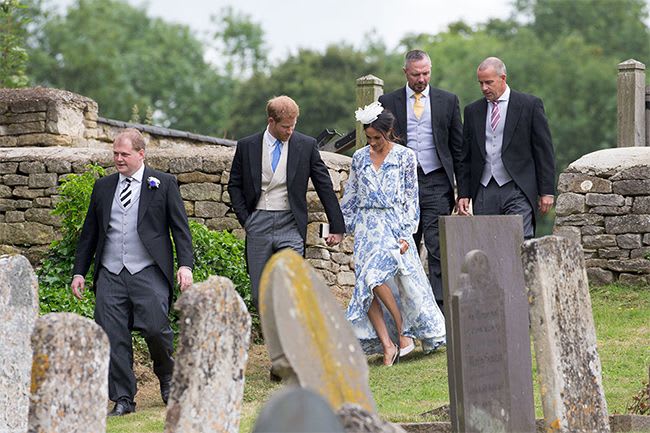 In June 2018, Prince Harry and Meghan Markle attended the wedding of Princess Diana’s niece Celia McCorquodale in Lincolnshire. As they were walking downhill towards the church, Meghan was caught stumbling in her heels, but luckily Prince Harry, who she was holding hands with, was there to save the day!

After his wife’s near-fall, Harry protectively stopped for a second to make sure she was okay, before they carried on walking to the ceremony. The former Suits actress, who looked elegant and demure in a blue maxi dress, laughed off the near mishap and carried on walking. 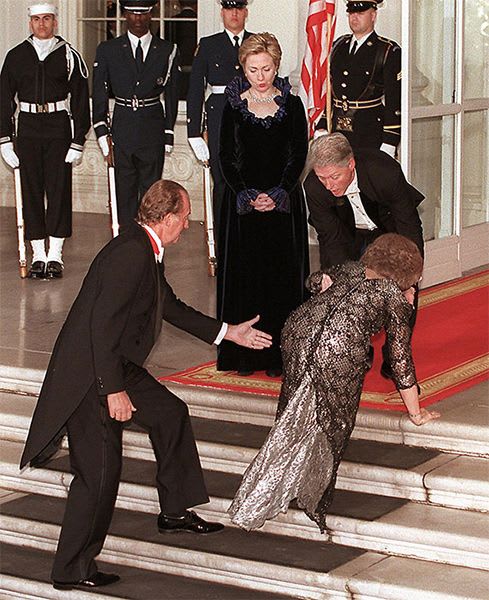 Floor-length gowns and stairs are never a good mix! Queen Sofia of Spain learnt this the hard way when she tripped up while arriving at a state dinner at the White House in 2000. Hillary Clinton could be spotted looking on in concern as President Bill Clinton and Sofia’s husband, King Juan Carlos, swiftly helped her up. 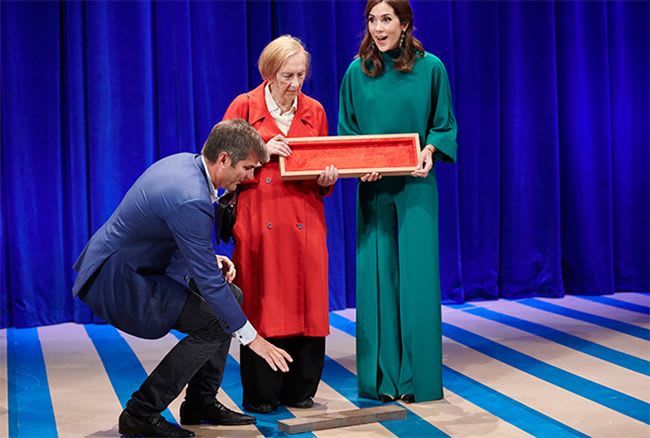 Princess Mary of Denmark laughed off a blunder at the Design Awards 2018. The royal was on stage to present the Designer of the Year award to architect Lars Vejen, when the award in the box fell out and landed on stage. The award was quickly put back with the help of the princess, and the group presenting the award laughed off the gaffe.

SEE: 14 of the Queen’s most breathtaking jewellery and tiara moments 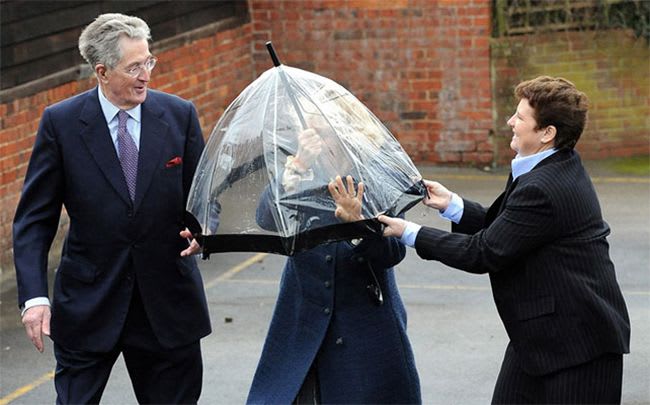 The Queen Consort appeared to need some assistance as she struggled with an umbrella during a windy visit to Wiltshire in 2011. We’ve all been there!

The Princess of Wales 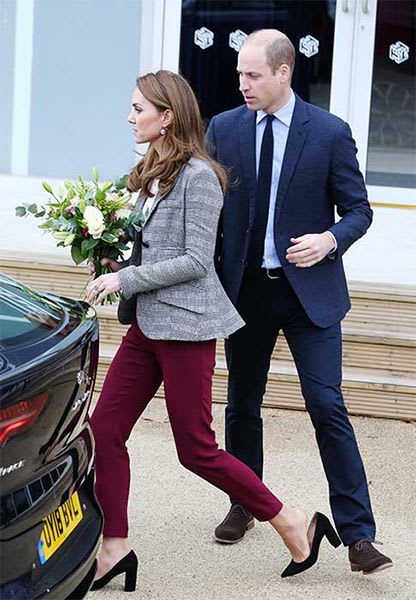 The Princess of Wales nearly tripped up as she left the Troubadour White City Theatre in west London in November 2019. William and Kate were saying goodbye to their hosts after Shout’s Crisis Volunteer celebration event, when the Princess appeared to stumble, as she made her way to the car. Kate kept her composure as her foot slipped out of her Gianvito Rossi heels and even laughed it off with her husband William. We’ve all been there! 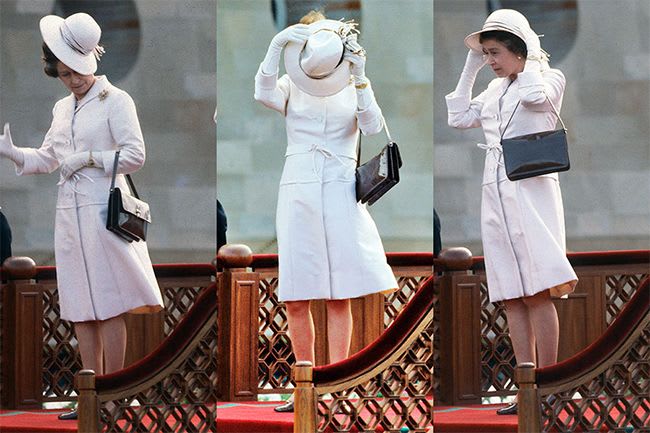 The Queen didn’t often lose her composure, so when she nearly lost her hat in the strong winds while attending a welcoming ceremony with Sultan Qaboos of Oman in Muscatvin in February 1979, it was a moment to remember – particularly when she masterfully caught the escaping headwear and put it back on.

LOOK: 7 best photos of the Queen meeting babies through the years 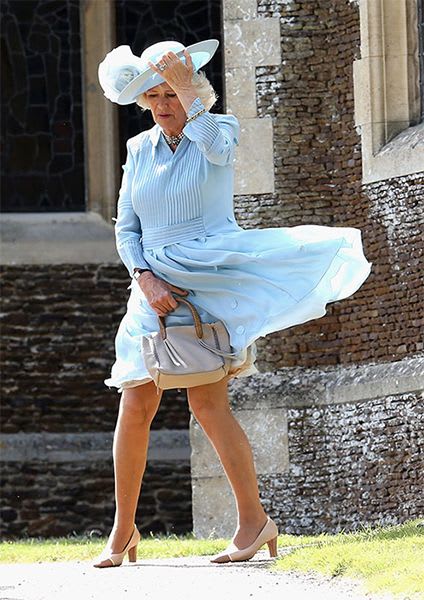 The Qiueen Consort didn’t realise how windy it would be when she attended the christening of Princess Charlotte in July 2015. Dressed in a powder blue dress with a matching hat, Camilla clung onto her outfit as she arrived at the Church of St Mary Magdelene on the Sandringham Estate. 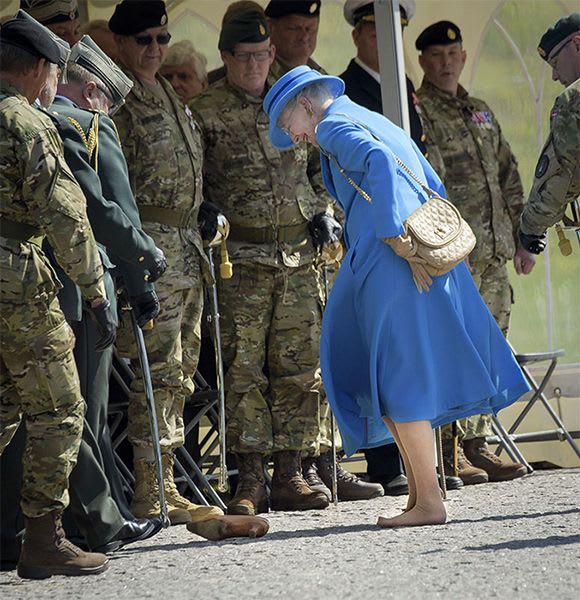 Queen Margrethe of Denmark laughed heartily as she lost one of her shoes while greeting the Home Guard in Copenhagen in 2017. Dressed all in blue, the monarch reached forwards for the shoe, with the guards on hand to offer their assistance. Naturally, the queen kept her composure during the mishap.