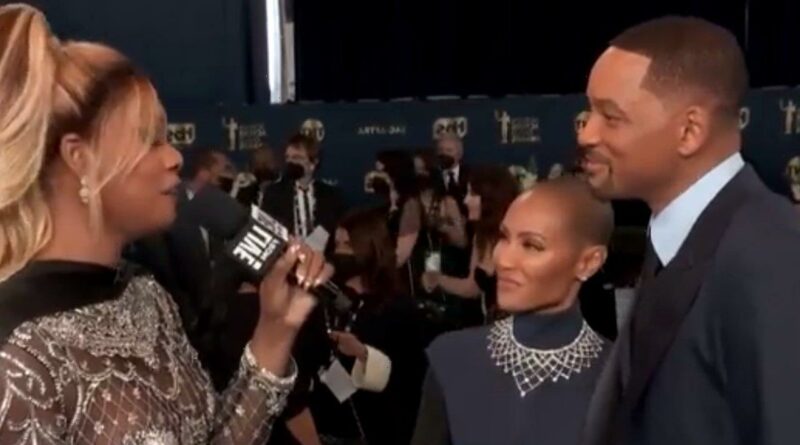 The ‘Orange Is the New Black’ alum brings up the ‘Red Table Talk’ host’s entanglement with August Alsina in front of her husband during a red carpet interview at the SAG Awards.

AceShowbiz –Laverne Cox joked about Jada Pinkett Smith‘s entanglement in front of Will Smith at the 2022 SAG Awards. The actress brought up the “Gotham” alum’s sexual relationship with August Alsina when interviewing the married couple on the red carpet.

The “Orange Is the New Black” alum initially talked about Will’s movie “King Richard“, for which he received a nomination for best movie actor and eventually won the award in the category. She wished him a good luck and told him, “We love you. Thank you for all the years of joy you’ve brought us.”

Laverne then turned to Jada and tried to end the brief interview in jest as saying, “Thank you. We cant wait for more ‘Red Table Talk’ and more entanglements.” Jada and Will let out awkward laughter to the joke, before “The Matrix Resurrections” star responded, “No more of those.”

The joke quickly drew mixed reactions from social media users. “Will and Jada handled that well lol,” one Twitter user praised the pair. Another was amused, “Laverne Cox bringing up Jada Pinkett Smith’s ‘entanglement’ in front of Jada and Will on the red carpet… iconic behaviour.”

Some others called out Laverne for bringing the entanglement talk. “Laverne Cox knows she’s messy for that entanglement talk with Will and Jada #SAGAwards,” one critic said. Another noted, “Ohhh Lavern almost got a high five in the jaw for her low balls.” A third critic added, “Tacky on Laverne Cox’s part.”

“Only a tran’s whose vest is tight can get away with making a horrible statement like that. Normal person would have been canceled,” one other claimed. Someone else stated, “Cox is a Stupid Beach. Now suppose somebody brought up her trans operation on Live TV?”