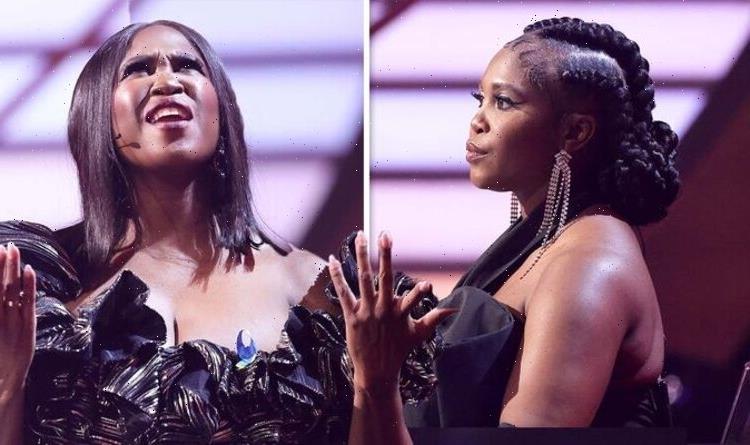 This Morning: Motsi Mabuse disccuses her family in Ukraine

Motsi Mabuse, 40, has been a judge on Let’s Dance, the German version of Strictly Come Dancing, since 2011. Following the show’s most recent episode, Motsi didn’t seem too impressed when one viewer criticised the judges saying their scoring didn’t “make sense”.

After Friday’s instalment, a fan named Daphne took to Twitter to rage that German actress Sarah Mangione had been scored lower than paralympic athlete Mathias Mester despite only making a “small mistake”.

A translation of her tweet reads: “Matthias danced so many times last week and he got nine points each from the jury.

“Sarah makes a small mistake and only gets 23 points?? Make it make sense #LetsDance.”(sic)

Motsi replied to the user within a matter of minutes and defended the judges’ scores.

Before sitting on the judging panel, Motsi joined Let’s Dance as one of the professionals in 2007.

She finished in fifth and sixth place with her celebrity partners across two series.

In 2019, Motsi joined the judging panel on Strictly Come Dancing, where she replaced Darcey Bussell.

The South African-born star moved to Germany when she was 18 years old to pursue her love of dancing.

She is now based there with her Ukrainian husband, Evgenij Voznyuk, and their four-year-old daughter.

It comes after Evgenij’s parents finally fled Ukraine and have moved in with the family in Germany.

Speaking on This Morning last week, Motsi opened up to Holly Willoughby and Philip Schofield about the horrors her in-laws had endured while trapped in Kharkiv.

She said that their home had been demolished after their neighbours’ house was bombed so she believes they will live with her and Evgenij “forever”.

The Strictly judge said: “The house is gone, they live with us now, probably forever.

“It affects us all when you see those pictures, I think if you’re a human being and you see this happening to people, it affects you.

“It affected my husband so much, I didn’t think it would affect me so much.”

Motsi and her husband have been raising money for Ukrainian refugees by selling candles and using social media to increase awareness.

Evgenij has also been driving to the Ukraine border to pick up people escaping the country and Motsi told the ITV hosts that she is “supporting dancers”.

She continued: “There is a massive dance community in Ukraine…It breaks my heart, I could cry because people will do anything.

“We are watching from the outside thinking, ‘How can I help?'”