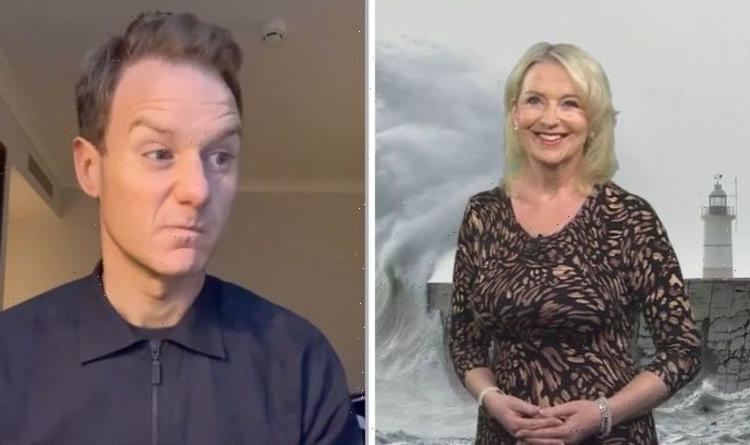 Carol Kirkwood, 59, has responded to a co-star’s farewell post on Twitter. The weather presenter posted a short message to her followers after Dan Walker shared his goodbyes to Strictly Come Dancing.

Well… what a ride!

Carol responded to co-star Dan’s emotional Twitter post saying farewell to his Strictly fans as he leaves the show.

Dan’s original message included his expression of gratitude for the show itself as well as his dance partner, Nadiya Bychkova.

“#Strictly has been a truly wonderful experience for me. I enjoyed every second.

“@NadiyaBychkova is a superstar: kind, encouraging, funny, clever, the best teacher I could ever have hoped for & a great friend.

“Thanks for the support & thanks for having us.”

Dan Walker responded to a BBC Strictly post that read: “Dan the dancer has come so far, with the brilliant Nadiya guiding him through every step.

“A partnership to be proud of! #Strictly.”

Dan Walker recently made the news after a spat with Piers Morgan following his exit from Strictly.

Piers took a swipe at his ex-Breakfast co-star after his quarter-final exit alongside partner Nadiya Bychkova.

Dan had just taken to Twitter to thank his dance partner for “being the best teacher I ever could have asked for” following the pair’s departure.

Piers issued a brutal jibe in response, replying sarcastically to Dan in view of his 7.9 million followers: “You came fifth, mate. She needed a better pupil.”

But Dan didn’t let Piers’ comments get to him, delivering a witty comeback.

The BBC star cheekily mocked the former ITV presenter’s infamous exit from GMB, which saw him storming off the set following an argument with weatherman Alex Beresford over Meghan Markle’s interview with Oprah Winfrey.

Dan posted a GIF of the moment Piers stormed out, as he fired back at Piers: “Morning.

“I did think about walking off when @CraigRevHorwood gave me some grief in week 2 but… who does that?”

No1Ghirl wrote: “I don’t even watch Strictly, but this retort is class.”

Kirstin Bailey commented: “Dan you are a real gentleman. I have really enjoyed watching you every week. I can’t say the same about that Morgan chap!”